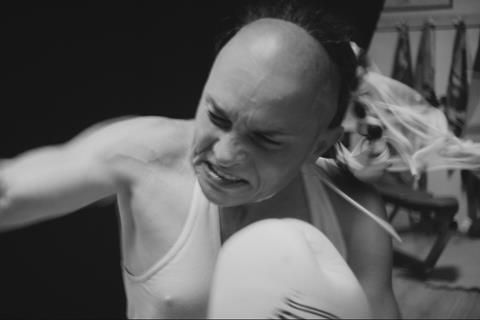 While the ‘Faith’ of the title of refers to the spiritual choice of the people in this documentary – a sect of 22 “Warriors of Light” practising an odd hybrid of Catholicism and Shaolin kung fu in an isolated Italian rural commune – it could also reference Italian director Valentina Pedicini’s well-placed trust in her audience to embrace her immersive and purely observational approach to the subject. The result is an engrossing look at a community that is a lot less Zen than it might first appear and a film which, with its fine monochromatic camerawork from Bastian Esser and its unusual angle on the idea of cult religion, could easily attract interest beyond the festival circuit after its IDFA world premiere.

Much in the film is left open to interpretation

Quickly setting out the sect’s history with on screen text, it is immediately evident this is no ordinary monastery as we see the inhabitants – termed Warrior Monks and Guardian Mothers and all in their permanent white dress code – dancing in strobe lighting to David Tort’s electronic dance track ’Yo Te Prefiero’ with the sort of passion that feels like a primal scream. This is just one of the many strange physical exertions they undergo under the tutelage of the Master; a martial arts expert who set up the closed community 20 years ago in a bid to prepare for the “final battle” and whose total emotional control of the group becomes increasingly disturbing as the documentary progresses.

Chief among the “warriors” is Laura “White Angel” Perrone, who the Master treats as his star pupil and who apparently guards him as he sleeps. In some of the film’s most disturbing moments, however, she is seen being pushed to the limit (and possibly beyond) by his training. He’s also seen holding pseudo-therapy sessions in the middle of the night with the sleep-deprived women. That the Master appears to be in at the very least a quasi-sexual relationship with more than one of them only furthers the sense of unease regarding the situation – although because there are no direct interviews with any of those taking part, ideas around consent remain ambiguous.

In a meeting of the group, one of the younger men is given a dressing down and threatened with expulsion over a relationship with a woman who left the group. As the camera drinks in the situation, just how much of this is down to the patriarch’s concern for the woman and how much down to a perceived threat of a male rival is, like much in the film, left open to interpretation.

Two people who don’t have much say in the matter of remaining are the youngest members, the Master’s grandchildren – six year old Altair and three-year-old Olimpia – to whom the documentary is dedicated. They’re seen having fun playing with their mum and dad, and being taught the names of herbs or words for things in English, but this is also a life of enforced ritual, including regular head shaving, and restriction. The Master’s own daughter, who is 21 and has presumably, spent almost, if not all, her life in the community, also prompts questions surrounding choice.

The decision to shoot in black and white obviously mirrors the monks’ mindset, with the edge of the frame almost totally lost to shadow; particularly noticeable in the few outdoor moments. But the observational nature of the film means that Pedicini and Esser – returning to the community where they first shot her student short film 11 years ago – could never be accused of a hatchet job. Instead, watching these everyday lives moves from an act of contemplation to interrogation as we see the positive and, increasingly, negative sides of the community’s largely unquestioning faith in their leader.