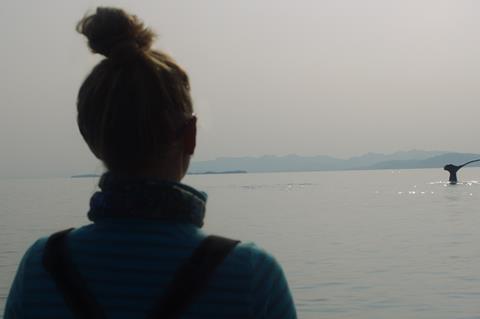 More often than not, scientific exploration isn’t about the eureka moments as much as the slow, arduous trial and error required in order to eventually attain some tiny insights into our world. That’s the thesis that powers Fathom, which follows two researchers diligently studying humpback whales, each of them in a sense also trying to reconcile something within themselves. The second nonfiction film from Drew Xanthopoulos (The Sensitives) eschews the glossy photography and majestic tones of most nature documentaries, preferring a hushed curiosity about how data is collected and, just as importantly, how setbacks can be as common as discoveries. Meditative more than dynamic, it’s a film about communication in which the mammoth mammals are as elusive as the people tracking them.

Fathom premieres at the Tribeca Festival before streaming on Apple TV+ in the US starting June 25, and indeed the intimacy of home viewing will serve this modest picture. Considering the success of the BAFTA- and Oscar-winning documentary My Octopus Teacher, there may be more appetite for stories of the deep blue sea, although Xanthopoulos’ film isn’t nearly as touchy-feely. But those fascinated by how scientists do their work may well take the plunge.

Serving as his own cinematographer, Xanthopoulos cross-cuts between two separate stories: that of Ellen Garland, a scientist living in Scotland who journeys across the South Pacific studying the songs humpbacks sing; and Michelle Fournet, an American researcher trying to make contact with whales in the waters of Alaska. Both women have spent their careers hoping to understand how humpbacks communicate, bringing along a few team members on their solitary explorations.

Fathom will disappoint anyone seeking the sort of conventional documentary in which a problem is solved or a mystery is unlocked. Humpback whales remain as unknowable at the end of the film’s 87-minute runtime as they were at the start. And, to be sure, there can be frustration at the slightness of Xanthopoulos’ tale, which only offers us glimpses into Garland and Fournet’s lives. Truly, Fathom’s lack of momentousness can make the picture seem uneventful, even trivial.

But this, ultimately, is Xanthopoulos’s point, emphasising the long hours and painstaking patience that define researchers’ labour. Fathom doesn’t worry so much about explaining the scientific complexities of Garland and Fournet’s experiments, instead letting us eavesdrop on their conversations with their associates as they monitor the whales, adjust their methods and meticulously record their results. There’s an intentional absence of glamour and adventure in the depiction of these field studies, but the contentment on their faces suggests the deep satisfaction they feel.

Perhaps too overtly, Fathom juxtaposes humanity’s inability to speak to humpback whales with our own challenges in connecting to one another. Xanthopoulos isn’t interested in on-camera interviews, preferring to interweave his subjects’ thoughts on loneliness and separation over images of them at work — or catching Garland and Fournet talking to their peers about regrets during a casual moment of downtime. Slowly, we realise that Garland hates being away from her husband when she goes on her explorations, while Fournet admits that she’s taken the parts of “real life” that she likes and brought them out into the field, where she feels happiest — at the price of having a family.

Because Xanthopoulos keeps his camera on Garland and Fournet, their beloved whales are often only seen in the distance — an unavoidable reality since, as is mentioned in Fathom, those mighty beasts could easily capsize the teams’ tiny boats if they got too close. The documentary makes no attempt to turn the whales into adorable critters, respecting their enigmatic soulfulness as well as that of these two women who have made it their calling to better understand these mammals. Simple, effective animation brings the whales’ singing to life, and Xanthopoulos includes enough information so that we appreciate the density of their complex language. Like its subjects, the film retains some awe about these creatures and all that we still don’t know about them.

Fathom’s disarming humility can sometimes be too much of a good thing since Garland and Fournet’s exploits are occasionally incredibly minor. (A major plot point in this leisurely paced film concerns Fournet’s boat engine breaking down, impairing her ability to collect data.) Xanthopoulos doesn’t try to oversell the stakes or create artificial drama. But if one can get on Fathom’s gently curious wavelength, there’s a quiet dignity to its study of the solitary souls out there trying to find communion with similar spirits.