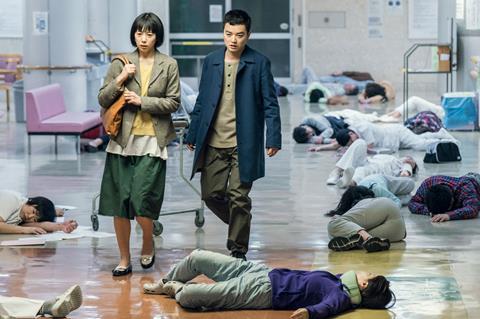 “It all began with a sense of foreboding.” So begins Kiyoshi Kurosawa’s Foreboding (Yocho), a curiously human-scaled end-of-days drama that never raises its voice above a whisper. That sense of foreboding continues all the way to the end, and though the film does score points for an original spin on a familiar Invasion Of The Body Snatchers theme, its act does begin to wear a bit thin when spread over a languid 140 minutes.

That’s not how it started out, however. Playing in Berlin’s Panorama Special, this version of Foreboding collapses five episodes of a TV mini-series that aired as a companion piece to Kurosawa’s 2017 film Before We Vanish; and it shows, resulting in a theatrical experience that leaves viewers with the slight discomfort of having binged too much. Still, Kurosawa’s talents behind the camera are undeniable, and that should make this film an easy sell to his many fans around the globe, even if it doesn’t seem as likely to breakout beyond them.

Foreboding’s original format is most apparent in the film’s unhurried pace; though we’re introduced to lead character Etusko (Kaho) right at the top, she spends the first thirty minutes or so investigating a side plot that subsequently falls away. The main narrative tracks a jealous triangle between Etsuko, her husband Yamigawa (Shota Sometani) and the dead-eyed Dr. Makebe (former model Masahiro Higashide). Dr Makebe, though, is a shape-shifting extraterrestrial who has come to Earth to learn its customs ahead of an upcoming invasion and finds, in Etsuko, the one human who cannot fall under his control.

The story gradually expands outward to introduce more characters and narrative threads, before contracting to isolate the three leads for its final act. That middle section offers by far the most interesting moments, following Makebe and his mind-controlled minion Yamigawa as they trawl the streets looking for new human emotions (or as they’re called here, “conceptions”) for the hungry alien to absorb.

Kurosawa delivers a wide-scale invasion narrative without any news-report cutaways, elaborate production design or ostentatious visual effects. His guiding principle is the uncanny, relying on a series of otherwise mundane sets rendered slightly askew thanks to the widescreen compositions and DoP Akiko Ashizawa’s vivid light. Most likely due to the source material’s stage-bound origins and the certain budgetary restraints, this myopia gives the material a hushed, intimate focus entirely uncommon to the genre – sometimes at the expense of the global threat the story wants to impart.

Other technical specs further the growing unease. Though used sparingly, unearthly reverberations – sounding like drums banged from far underwater – occasionally pop in to destabilise, while Kurosawa’s precise camerawork grows increasingly agitated as the invasion draws near and the characters sit on the precipice, waiting for the end of the world.

Screenplay: Hiroshi Takahashi, Kiyoshi Kurosawa, based on the original play Before We Vanish by Tomohiro Maekawa