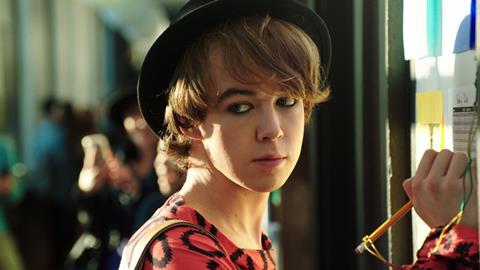 High school is a drag when you’re a queer outsider who has been spirited away to conservative climes — and when dressing in drag is your main method of self-expression. Eye-catching outfits aren’t the only thing Freak Show dons in abundance as it brings the second book by Party Monster author James St. James to the screen, however. Eagerly slipping into the perky attire of popular teen hits gone by, the directorial debut of actor/producer Trudie Styler couldn’t wear its heavy-handed lesson in acceptance more prominently.

Screening in Berlin’s Generation 14plus sidebar, Freak Show’s formula, fabulousness and feel-good messaging doesn’t sparkle so much as soak up the glow of its obvious predecessors (tellingly, Lindsay Lohan and Glee are both name-checked). Still, the youthful target audience for the punchy-enough angst likely won’t mind — though the film is likely to fare better on VOD than in cinemas.

Billy Bloom (Alex Lawther, The Imitation Game, Departures) is a glitter-faced newcomer to the local high school. While tender about being torn away from his rehab-bound mother (Bette Midler), and forced to stay with his stern father (Larry Pine) and housekeeper (Celia Weston), he’s fierce as far as his theatrical personality is concerned. Alas, splashing his flamboyance around results in blank looks: “I just moved here from Darien, Connecticut, the hometown of Chloe Sevigny,” isn’t an effective ice-breaker with mocking jocks and cruel cheerleaders.

Derision, a flock of spitballs and a coma-inducing beating follow, with Billy finding friends in the talkative hanger-on he nicknames Blah Blah Blah (AnnaSophia Robb), and the football hero with a sensitive side (Ian Nelson) he can’t help lusting after. It’s a by-the-book fish-out-of-water narrative that flits between predictable episodes, and is always treated as such by Raising Helen screenwriters Patrick J. Clifton and Beth Rigazio — right down to the climactic bid for homecoming queen that lets Billy’s freak flag fly against a bible-bashing, “make America great again”-spouting mean girl (Abigail Breslin, floundering under too many stereotypes).

The film has such a strong sense of its central character, the fact that little else in Freak Show posesses the same pizzazz becomes even more obvious. Indeed, it’s easy to imagine Billy blasting the movie’s derivativeness with the same sassy dress-downs he fires at his new peers. Styler’s directorial debut isn’t the cinematic equivalent of wearing blue jeans, but much of its flash and style — though gorgeously costumed by Colleen Atwood and Sarah Laux — smacks of calculation and imitation rather than real flair.

Instead, other than its lead and its timely anti-bullying, pro-tolerance stance, it’s left to Freak Show’s raft of talent, on-screen and off, to keep things moving. Laverne Cox is memorable as a reporter who is on Billy’s side, while John McEnroe and Styler’s daughter Mickey Sumner both lend their recognisable faces. And, while it might not rank among his best work, the film is glossily lensed by veteran great Dante Spinotti.