‘Get The Hell Out’: Toronto Review 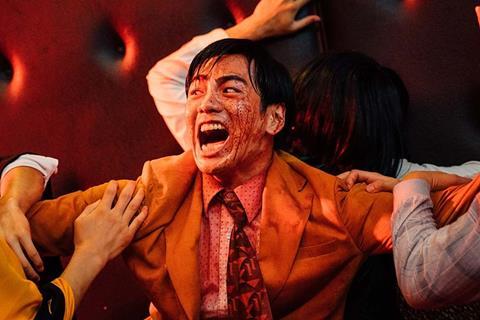 ‘Get The Hell Out’

The buzzsaw energy never dissipates in Get The Hell Out, a zombie comedy that cycles through so many tones and genres that the stylish excess is even more infectious than the film’s ravenous undead. The feature debut of director I-Fan Wang coasts on its cheeky good humour, although this tale of a rampaging virus that overtakes Taiwan’s fractious parliament also sports a modest political bite. But for most viewers, the sheer visual assault, which mixes in everything from video games to karaoke videos, will overwhelm any attempt at commentary or character development.

Selected for Toronto’s Midnight Madness section, Get The Hell Out is the sort of giddy big-screen experience that’s ideal for late-night festival screenings. Alas, the ongoing pandemic will curb those communal pleasures, but even so the film should cater to genre fans, who will relish every blood-spewing scene, of which there are many.

Megan Lai plays Ying-Ying, an ambitious new member of parliament who wants to stop the development of a toxic chemical plant being built nearby her family home. But Ying-Ying’s temper gets the better of her — it’s not advisable to use martial arts on journalists you dislike — and she’s kicked out of office. Undeterred, she recruits You-Wei (Bruce Ho), a lowly security guard who’s been in love with her since they were kids, to run for her seat, offering to coach him so that he can be her spokesperson in Taiwan’s legislative body.

That political manoeuvring constitutes the first half-hour of this 90-minute film, but Wang never lets us forget that a zombie uprising is imminent. Get The Hell Out starts with a flash-forward to the bedlam that awaits, and then occasionally puts up a disclaimer for how soon until the zombie attack will commence. That kind of irreverent humour is a hallmark of the screenplay, which was co-written by Wang, who brashly moves between romantic comedy, family drama, action-thriller and political satire.

Similarly, his characters seem unfettered, exhibiting plenty of delightfully oddball behaviour and defying narrative logic. For instance, Ying-Ying tackles any problem, no matter how small, by putting people in headlocks or executing breathless flying moves where she wraps her legs around her adversaries’ head and throws them to the ground — and that’s long before the zombies even arrive. Inexplicably, and quite amusingly, just about everyone in Get The Hell Out is a martial-arts expert, which ends up proving quite handy once a virus (presumably from the plant) starts infecting parliament members. The country’s legislative chamber is known for violent public discord, but Wang impishly ups the carnage, turning the hall into the site of a royal rumble in which our heroes and a few fellow survivors will fight to stay alive.

Boasting vibrant colours and frenetic editing, Get The Hell Out gets off on its aesthetic brio. Even though blood sprays from victims’ necks, Wang’s film isn’t gory in a gross-out way. Rather, there’s a slapstick quality to the zombie attacks, with the director staging his sequences with a freewheeling, Looney Tunes-ish looseness. One wouldn’t call Get The Hell Out particularly scary — it’s laughs that Wang is after.

Considering that this hyperactive film rarely pauses for breath, incorporating animated interludes and shamelessly referencing Ennio Morricone’s spaghetti-western scores, Lai and Ho manage to establish an understated, affectionate rapport between their very different characters. (Ying-Ying is a sly tactician; You-Wei is a sweet dolt.) Those moments of quiet reflection are rare: In between knowingly melodramatic slow-motion set pieces and multimedia nods to Mortal Kombat-esque fighting games, Wang tries to insert a paean to the environment and the power of everyday people. It’s a nice sentiment, but Get The Hell Out’s heart seems more into executing a droll decapitation scene than making political statements. For now, his style outpaces his substance.