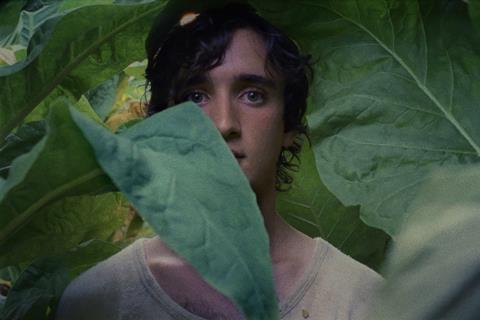 Italian rural realism, with occasional magical inflexions, may have lost two of its great exponents recently in the form of Ermanno Olmi and Vittorio Taviani, but Alice Rohrwacher proved herself a worthy inheritor with second feature The Wonders in 2014. That film had its eccentric tendencies, but it looks like rigorous naturalism compared to the delirious brew of modernism, folktale and fabulist invention seen in Happy As Lazzaro (Lazzaro Felice), which unravels with a Pinocchio-like logic that comes across as perplexing at first, then proves spellbinding.

A genuine UFO of a film that seems to come from another time and place, and certainly another imagination

Rohrwacher’s rising reputation, and the enduring art-house taste for Italian ruralism – which the film often confounds mischievously – should provide some international traction.

At first, we think we’re in familiar folkloric territory as a young man serenades his beloved in the countryside at night, with traditional bagpipe backing. The young lovebirds plight their troth, marsala is drunk, and so far we could be in the rural nineteenth century, or in one of those remote communities seen in any number of Italian films since Visconti’s La Terra Trema. Bit by bit, however, things become less clear: we’re definitely in the present day, as cellphones, headphones and hip-hop reveal, but these people are living in another era.

There are 26 inhabitants of various ages crammed into one house in a tiny village symbolically named Inviolata, amid a strange, quasi-lunar landscape of thistles and crags, all toiling to harvest tobacco for a haughty Marquesa (Nicoletta Braschi) who lives in a nearby mansion. It turns out that the families on her estate are essentially modern-day serfs or sharecroppers, forever in debt to their feudal exploiter, but blithely unaware of it.

Something of an outsider within the community is a gentle, childlike, otherworldly young man named Lazzaro (Adriano Tardiolo), whom everyone fondly tolerates and occasionally exploits. He ends up forming a bond of sorts with the Marquesa’s spoilt, foppish son Tancredi (Tomasso Ragno), who mounts a fake kidnap plot to get back at his mother. It misfires, and baffled police round up the villagers and take them to, supposedly, a better life.

Lazzaro, at this point, seems to have fallen permanently out of the action – but an unexpected future awaits this modern Lazarus, thanks to the supernatural intervention of one of the wolves that roam the locality.

It would be a shame to reveal the audacious change of register that follows, dominating the film’s second half. Suffice to say that it finds Lazzaro reunited with some of his old acquaintances, including young single mother Antonia, rather older and played by the director’s sister Alba Rohrwacher, and new friend, inventive burglar and con artist Ultimo (an affable Sergi Lopez, fitting perfectly into the Italian context). What started as eccentric, seemingly nostalgic realism shifts in this second half into a dream-like, satirically inflected mode with echoes of to Fellini’s La Strada and early Pasolini, in both its humour and its bleakness.

Artfully playing on spatial and temporal dislocation, with anachronism aplenty, the film benefits from its extraordinary rocky, ravine-riddled landscapes, constrasting with the urban deserts of the second half (locations include rural parts of the Viterbo and Terni regions and cities including Milan and Turin). Beautifully shot, like Rohrwacher’s other features, on Super-16, this film, with its richly textured images, does indeed feel at times like a retrieved and rather miraculous relic from a lost era of cinema, which is not to say that it isn’t of its own moment. Cult success at the least is guaranteed for a genuine UFO of a film that seems to come from another time and place, and certainly another imagination.