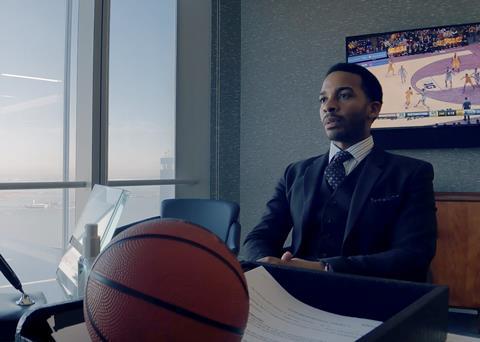 A basketball drama about the business and politics of the game, High Flying Bird is an oddly unconvincing exercise from Steven Soderbergh, who provides his usual cerebral cool but can’t find much insightful to say. Working in the same experimental, low-budget style which has inspired works as varied as The Girlfriend Experience and Unsane, the Oscar-winning director has made a stagy examination of a fast-talking agent who is determined to keep his career afloat despite an NBA lockout. And although compelling ideas float through High Flying Bird, the film is neither well crafted or intellectually rigorous enough to compensate for a generally lacklustre presentation.

Young, underprivileged black men give their talents to a corporate behemoth that exploits them

This Slamdance premiere will be coming to Netflix on February 8. Soderbergh’s name will be a draw, although a cast that includes André Holland and Zazie Beetz should entice viewers, too. However, the film’s major commercial obstacle is that it’s a sports movie without much sports in it, catering more to those interested in the behind-the-scenes machinations.

Written by Tarell Alvin McCraney, the Oscar-winning co-writer of Moonlight, the film stars Holland as Ray, a cocky New York sports agent who works for a management company that is experiencing economic hard times. Not helping matters is that the NBA (National Basketball Association) is in the midst of a lockout, which worries his rising-star client Erick (Melvin Gregg), who is desperate for cash and the opportunity to prove himself on the court. Working with his long-suffering assistant Sam (Beetz), Ray hatches a gutsy plan that he hopes will sidestep the NBA’s rule that players can’t play until the labour dispute is settled.

Soderbergh shot High Flying Bird on an iPhone, although the effect isn’t as intentionally disorienting as it was for Unsane, where he incorporated the same technique. Still, the iPhone allows for intimacy as we watch the lightning-quick Ray use his gift for the gab to control any conversation, even as he secretly worryies about his own finances and future.

McCraney’s screenplay emphasises pointed, insider-y dialogue. Whether we’re in sleek high-rise offices or well-worn basketball gyms, Soderbergh plunges us into these characters’ specialised realm, and those not familiar with basketball and its business practices may be at a loss when Ray and his associates speak in a shorthand full of jargon and the occasional pop-culture reference.

No doubt that shorthand is meant to convey authenticity, and there’s a fleeting buzz to this glimpse inside the “real” NBA, where agents, coaches and owners have more power than the athletes. But despite assembling a fine cast, Soderbergh never quite crafts a believable world in which these actors can operate. That’s surprising, given that one of Soderbergh’s many gifts is his ability to fashion fascinating ecosystems (think of Magic Mike’s Florida strip clubs or The Girlfriend Experience’s peek at New York escorts). But the suspense around Ray’s manoeuvring rarely gives us a greater understanding of the inner workings of professional sports.

Nonetheless, Holland (one of Moonlight’s stars and part of the ensemble of Soderbergh’s TV series The Knick) brings a mix of confidence and weariness to his role. (As his free-spirited assistant, Beetz makes for a fine sparring partner, although she is underutilised.) Throughout, High Flying Bird makes it clear that the NBA — like most American institutions — is incontrovertibly racist, and that tension weighs heavy on Ray, who loves the game and his client but sees how the system is rigged against them. The actor depicts Ray as far more than a clichéd slick-agent type, and there’s real soulfulness to the character’s struggle.

The problem is that Ray’s grand scheme, which won’t be revealed here, sounds implausible, and High Flying Bird never sells the viewer on why it would actually work. This hampers the film’s attempts at realism, which include cutaway interviews with actual NBA players who discuss the sobering realities which face rookies entering the league.

On occasion, the film brushes up against interesting observations about the inequitable structure of professional basketball — how young, underprivileged black men give their talents to a corporate behemoth that exploits them. Pertinent issues concerning race and class inform High Flying Bird’s drab plotting, giving it some immediacy and energy. But while focusing on the nuts and bolts (and dollars and cents) of big-time athletics, Soderbergh misses the drama and urgency inherent in his high-flying, high-stakes subject matter.