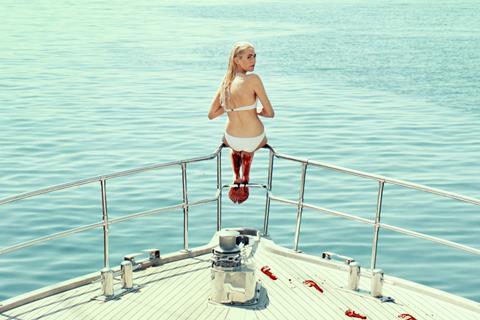 The feature debut from Swedish writer/director Isabella Eklöf is an uncompromisingly tough and unforgiving study of social standing and market forces. Through the eyes of Sascha (Victoria Carmen Sonne), we get a glimpse of the complicated power structures within a criminal gang; we also experience Sascha’s dilemma as she is pulled between two starkly contrasting worlds. Unfortunately some of the power of this resolutely unflinching drama is lost because Sascha is such a vacuous and shallow presence at the centre of picture.

With its chisel-hard approach to the failings of contemporary society and an eye for arrestingly composed snapshots of human weakness, Holiday will likely draw comparisons with the bleaker end of Ulrich Seidl’s oeuvre. And although it’s a tough watch – degrading scenes of Sascha’s sexual humiliation are particularly troubling – the main obstacle for distributors will not be the difficult subject matter but rather the absence of a relatable protagonist. Further festival interest should, however, establish Eklöf as a talent to watch.

Young, decorative and nakedly avaricious, Sascha (Victoria Carmen Sonne) is the new girlfriend of drug dealer Michael (Lai Yde). She is introduced in an elegantly composed opening shot, teetering on precipitous high heels through a deserted airport. She joins Michael and a group of friends on a luxury holiday in Turkey, but must accept that this decadent lifestyle comes at a cost – not least that her own position within this de facto ‘family’ is as just another status symbol to be owned and displayed by Michael.

Sascha is curious character; self-contained and self-obsessed but almost completely without self-determination. She is unformed and uninformed, guided by instinct, appetite and apathy rather than considered thought. A recurring motif shows Sascha consumed by her own reflection, flirting with herself and trying out facial expressions in the same way that she tries on an array of skimpy bathing costumes. You get the sense that her interactions with people are not so different from her interactions with mirrors.

This is why, when she meets Dutch tourist Tomas (Thijs Romer) in a queue for ice cream, she is gratified by the open admiration that he reflects back at her. The violent beatings that Michael orders on subordinates who have displeased him should give Sascha a sense of the dangerous game she is playing by flirting with Tomas, but she goes ahead anyway.

Production design emphasises the glossy sharp edges of luxury living. The villa that houses Michael and his fawning hangers on looks like a boutique in which Sascha is just another glitzy item for sale. A scene in which Michael toys with her unconscious body after she passes out leaves us with little doubt as to how much respect he has for her. What’s really uncomfortable is the crux of the film: how little respect Sascha has for herself, and how quickly she adapts to a new normality in return for a nice pair of earrings and a well-funded credit card.