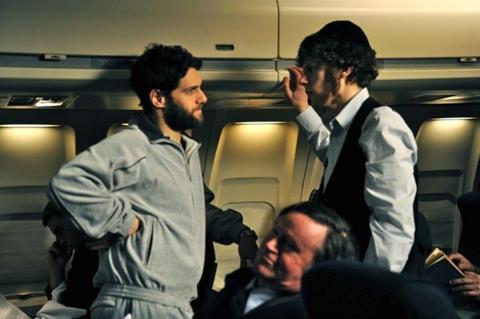 Holy Rollers boasts a colourful concept – drug-dealing Hasidic Jews – which might make it attractive to buyers, but in truth the film is less a violent gangster picture than a contemplative character study.

In 1998 Brooklyn, 20-year-old Sam (Eisenberg) is a devout Jew who works in his father’s fabric store, but when his neighbour Yosef (Justin Bartha) suggests he make some extra money by shuttling ecstasy from Amsterdam to New York, he discovers that he likes the danger inherent in this illicit trade.

Taking a page from Goodfellas and other films about a young man’s introduction into the seductive world of crime, Antonio Macia’s screenplay follows the rise-and-fall template of such stories fairly routinely. As a result, even though Eisenberg is solid as this sheltered, precocious kid who feels reborn as a drug dealer, Holy Rollers never fully integrates the specific Jewish subculture into its plot.

The conflict Sam feels between his religious heritage and his immoral endeavours should be eating away at the very soul of the character, but that inner turmoil is instead replaced by generic story beats, which inevitably build to a finale wherein Sam’s seemingly perfect new life collapses.