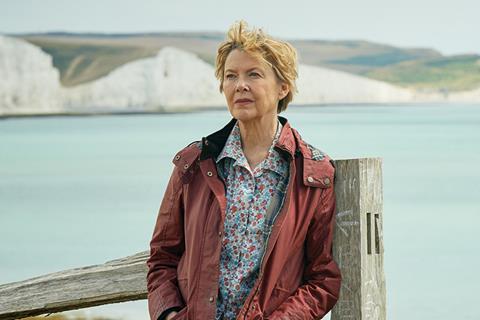 What happens when love fades? That’s the familiar but eternal question that drives Hope Gap, a modest, tasteful family drama in which a son learns that he knows nothing about his mother and fears he’s turning into his father. Adapting his own play, Oscar-nominated writer-director William Nicholson (Shadowlands, Gladiator) prefers an intellectual, restrained approach to potentially overwrought material, and Annette Bening and Bill Nighy give sure, steady performances as a long-time married couple pondering what awaits them in their uncertain golden years.

The leads consistently mine the complexity in Nicholson’s script

Premiering in Toronto, Hope Gap will appeal to older viewers and fans of the two leads. The movie very easily fits into the niche of grownup, sombre relationship dramas — more 45 Years than Who’s Afraid Of Virginia Woolf? — with only moderate theatrical prospects. Roadside Attractions and Screen Media are slated to release this delicate drama in North America in 2020; awards buzz seems doubtful, but the film should benefit from warm notices.

Soon to celebrate their 29th wedding anniversary, Grace (Bening) and Edward (Nighy) have reached an uncomfortable emotional impasse: She wants him to be more engaged in their relationship, but he can’t summon the effort. Beckoning their adult son Jamie (Josh O’Connor) to their seaside home, Edward prepares to deliver difficult news that will profoundly affect each member of this melancholy family.

Hope Gap doesn’t feel overly stagy or talky, a compliment to Nicholson’s confident, muted handling of what is a reliable, albeit overused dramatic narrative: the dissolution of a marriage. Eschewing actorly pyrotechnics — there’s no showboating among the cast, and even the film’s few monologues have a relaxed naturalness — the film (based on Nicholson’s 1989 work The Retreat From Moscow) never oversells the uniqueness of the characters or their circumstances. Quite the contrary, Hope Gap targets the story’s universality — how people sometimes see in their spouse an idealised partner who isn’t actually there, and how children can’t quite fathom their parents’ lives.

None of this is terribly original, of course, but the leads consistently mine the complexity in Nicholson’s script. Nighy gives a master class in withdrawn, mumbling ineffectualness — Edward is a spectral presence, even though he’s very much alive — while Bening is superb as a retiree whose shock at her disengaged husband inspires a suite of conflicting emotions. The role lends itself to operatic flourishes, everything from seething anger to crushing despondency, but Bening largely resists the temptation, giving us a character whose exacting, aggrieved temperament alternates between being heart-breaking and tiring. But even when the characters are at odds, Bening and Nighy silently communicate the pained bonds that still hold them together.

Indeed, Nicholson works hard to put the blame on no one, allowing the mystery of what causes couples to founder to remain unanswered. In truth, it’s neither Grace nor Edward’s fault but, rather, some ephemeral combination of them both. Grace maybe tried too hard — and expected too much — in their marriage, while perhaps Edward didn’t try hard enough. As such, O’Connor’s portrayal of Jamie becomes a crucial guide into this delicate battle of wills. Playing mediator, Jamie sees both sides in the skirmish, an impossible circumstance that leaves him as unmoored as his parents. He has lived all his life around these two, but they remain strangers.