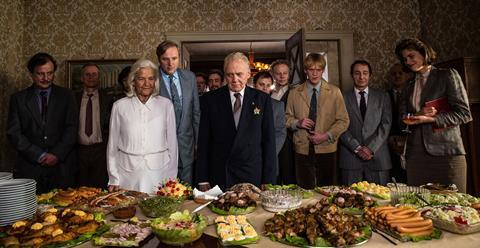 The end of a modern era plays itself out as a family occasion that’s memorable for all the wrong reasons in In Times of Fading Light, an ensemble piece that does more than justice to its dramatically challenging theme. Bruno Ganz is superb as the diehard Communist patriarch of an East German family at a moment when all his long-held ideals are being exposed to the harsh light of a new historical day.

Thematically, dramatically and visually, this is a sombre, intelligent piece in which psychological finesse combines with historical analysis to result in genuine dramatic heft.

Directed by film and TV veteran Matti Geschonneck (Moebius) and written by eminent German screenwriter Wolfgang Kohlhaase, this drama is set on a small stage – a claustrophobic family gathering – but sets the historical resonances ringing with fluency and emotional directness. Fascination with the old days of the GDR won’t in itself make this film as commercially appealing as The Lives of Others or Goodbye, Lenin!, but it deals with similar background in a way that’s altogether distinctive and economical. Ganz’s fine performance will be just one of the qualities that will help this altogether classical, but highly compelling piece connect internationally in a modest but solid way.

Set in East Berlin in 1989, the film begins with a brief prelude showing a corner of rural Russia where autumn is known as the “time of fading light” – although it will soon become apparent that the light in question is really that of Soviet Communism in its final dimming moment.

We then meet historian Kurt Umnitzer (Sylvester Groth), as he talks to his 30-year-old son Sascha (Alexander Fehling), who has suddenly left his wife and studies; we soon learn that, like so many East Berliners at this particular moment, Sascha has left for the West. This news couldn’t come at a more inopportune moment, as Kurt’s family is about to celebrate the 90th birthday of his stepfather Wilhelm Powileit (Ganz), a veteran Communist and admirer of Stalin who is about to be awarded yet another medal for lifelong service to the Party.

The family gathers at Wilhelm’s home, as do various well-wishers and officials, all queueing to honour the great man. But not everyone is happy: Kurt’s Russian wife Irina (Evgenia Dodina) is stewing her long-standing bitterness in vodka, while Wilhelm’s wife Charlotte (Hildegard Schmahl) is showing the strain of living in her husband’s shadow. But while the emotions, and the background themes, are of the utmost seriousness, the cracking of an already delicate social surface is signaled by comic elements: a rickety food-laden table, a stuffed iguana, and a local policeman who can never manage to get to the toilet.

The Powileit house imposes an increasingly claustrophobic atmosphere, giving the film an undoubted theatrical flavor. Yet the drama never feels stagey or hidebound, and while in the first 20 minutes, the film’s somewhat conventional execution feels slightly stolid, once things warm up at the party the adept pacing and the vividness of the acting increasingly compel attention. The intensity is sustained right up to an ending that brings the film around full circle, showing that for this family – and for Russia and Germany alike – the world has changed irrevocably.

A superb Ganz, solemn and impish in turns, commands much of the attention as a venerable idealist increasingly unable to hide his shock that his beloved ideological certainties are crumbling. But Ganz never hogs the limelight, and overall this is a most democratic piece; Groth and Dodina excel as a tragically mismatched couple, while other notable roles are played by Angela Winkler, as a mysterious family friend, and Gabriela Maria Schmeide, as the Powileits’ domestic helper Lisbeth, bringing out distinct touches of Chekhov in this very Russian-influenced piece.

Bernd Lepel’s production design and Sabine Greunig’s costumes catch the tone of the GDR’s final days without that over-emphasis on ugliness that can cause such period pieces to look as if they’re indulging kitsch Östalgie. Thematically, dramatically and visually, this is a sombre, intelligent piece in which psychological finesse combines with historical analysis to result in genuine dramatic heft.

Screenplay: Wolfgang Kohlhaase, from the novel by Eugen Ruge