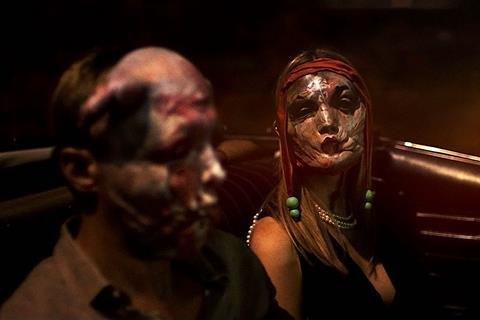 The holiday never ends in Infinity Pool, a disturbing look at an author who is spiritually adrift when he stumbles upon a strange collection of fellow travellers living in a surreal limbo state. Brandon Cronenberg’s third feature is best appreciated as a singularly unnerving experience, one punctuated with enough outlandish and disquieting moments to compensate for a script that can be episodic and thematically repetitive. But whatever reservations viewers may have about this kinky mind-trip, they won’t extend to Alexander Skarsgard’s expertly icy performance, which is perfectly attuned to the writer-director’s chilly vision.

Premiering in Sundance’s Midnight section, Infinity Pool opens in North America through Neon on January 27. Those who enjoyed Cronenberg’s previous pictures — including 2020’s Possessor, which also launched in Park City — will find plenty similarly unsettling here, and no doubt the target audience will groove to the film’s hypnotic pull and occasional bursts of absurdism. Skarsgard is joined by Mia Goth, only adding to Infinity Pool’s cult appeal.

James (Skarsgard) is a novelist on holiday at an upmarket resort in a fictional impoverished country, accompanied by his supportive wife Em (Cleopatra Coleman). It has been six years since James’ last book, and he’s hoping the getaway will provide inspiration — which comes in the unexpected form of another holidaymaker, Gabi (Goth), a heavily flirtatious commercial actress who loved his book. (Apparently she’s in the minority considering the novel’s poor sales and even worse reviews.)

Tantalised by her approbation and alluring looks, James insists to Em that they spend time with Gabi and her husband Alban (Jalil Lespert). However, events take a turn for the worse when he accidentally kills a pedestrian with the car they rented one night. To his shock, James is informed that local laws stipulate that the son of the dead man can execute him — unless, of course, James would prefer to be cloned, allowing that clone (which possesses all of James’ memories) to be killed in his place.

Not unlike his director father David, Cronenberg brandishes a cheeky sense of humour, fully recognising what’s ludicrous about his film’s premise — and then audaciously moving forward anyway. It’s best not to reveal what occurs after James’ discovery of this technology, but suffice to say Infinity Pool toys with the possibilities of what cloning could mean to someone like James, who seems to want to escape his own existence. Not surprisingly, when it’s suggested that perhaps he is the clone and the real James is the one being executed, the disillusioned novelist doesn’t seem all that perturbed. After all, it’s not as if the original James’ life was so great.

Skarsgard plays James as an empty vessel — a handsome but vacuous man clinging to the idea that he’s an impressive author. But as we’ll learn, Em is the one with money — and the publisher father who helped get James’ mediocre book out into the world — and so it’s understandable why James is seduced by Gabi’s praise and wild-child demeanour. James will learn just how much trouble she is, however, when realises that he’s not the only person at the resort who has had to undergo the cloning process because of an accidental killing — and that this bizarre club has unconventional ideas about how to welcome new members into their ranks.

Fresh off her psychologically rich portrayal in Pearl, Goth is riveting as a woman clearly hiding secrets. Once James becomes aware of exactly what is going on, Gabi alternates between teasing and torturing him, and Goth relishes letting the character become as demented as possible. The unblinking intensity in Goth’s eyes is upsetting, but there’s such glee in her menacing glimpses that they’re also darkly funny.

Early on, Infinity Pool assaults the audience with blood, semen and vomit, setting the stage for some of the harrowing sights to come. Occasionally incorporating strobe effects and psychedelic colours, Cronenberg drives home the depravity of James and his new friends, allowing the story to sink further and further into strangeness as our antihero adjusts to this odd new existence. Cinematographer Karim Hussain and composer Tim Hecker create a feast of pungent visuals and transporting music that amplify the film’s sense of disorientation.

As wealthy and privileged as these characters are, they’re hopelessly shallow, practically amusing themselves to death because of the unlikely pseudo-immortality they’ve uncovered. Skarsgard turns his face into a mask of moral blankness that’s compelling, even if Infinity Pool doesn’t have much new to say about economic inequality or the dark side of la dolce vita. But Cronenberg conjures up such a mood of existential dread, punctuated by terrible violence, wild sex and hallucinatory images, that the film leaves you in the same state as James: bewildered, unmoored, hungry for more.