A grieving couple are forced to relive a nightmarish camping trip 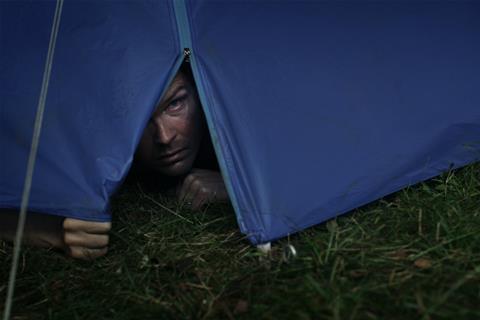 If you go down to the woods today, you’re sure of a big surprise. The premise of Swedish director Johannes Nyholm’s (The Giant) second feature Koko-di Koko-da, which sees a bereaved couple forced to relive the same nightmarish camping trip ad infinitum, may suggest a surrealist fantasy. Yet it reveals itself to be a keenly-observed adult fairy tale in which grief, guilt and blame bite harder than any big bad wolf.

A poignant exploration of the raw power of grief

Taking inspiration from folklore, the film’s other-worldly tone and striking artistry are likely to secure further festival interest after its Sundance premiere. Wider travel may be limited by the film’s phantasmagorical bent, but critical support and solid word of mouth could secure arthouse berths.

The opening sequence sets an immediate tone, as three strange characters roam through a misty wood: a grimacing ringleader, singing the creepy song which gives the film its title; a large strongman carrying a dead pig; and a tall, expressionless girl holding a vicious-looking dog on a leash. The next we see of them are as paintings on the sides of an ancient-looking music box, which is given to a girl by her parents on the eve of her eighth birthday.

The celebration with her parents Elin (Yiva Gallon) and Tobias (Leif Edlund) — the three of them lunching while wearing bunny rabbit facepaint — are marred by Elin’s extreme allergic reaction to her food and, later in the hospital, a shocking tragedy. Three years later, Elin and Tobias head off on a camping trip to try and mend their fractured relationship, only to be viciously assaulted by the trio of grotesques. After each horrifying encounter, time resets; gradually, however, Tobias grows aware of the lurking danger, and makes unsuccessful attempts to thwart it. (Indeed, in early iterations, his shockingly selfish survival instinct brings to mind the father from Ruben Ostlund’s Force Majeure, thinking only of himself at the moment of catastrophe.)

While the three cartoonish attackers loom large on screen, their Grimm appearance and off-kilter behaviour contrasting with the real-world setting, Nyholm’s focus is not on them, but on what they obviously represent. It’s clear that Tobias and Elin are stuck in emotional quicksand, each blaming themselves as much as the other for the fate that has befallen them.

Theirs has become a hollow relationship of unspoken resentment, accusatory looks, barbed conversations and abject silences. The huge distance between them is territory now occupied by their tormentors; it’s only by coming together than the couple can hope to best these particular demons.

Simon Ohlsson and Olof Corneer’s score, a blend of insidious music box melodies and haunting strings, gives the film an air of both threat and melancholy. Striking cinematography by Johan Lundborg and Tobias Hoirm-Flyck — in particular lingering aerial shots of the ghastly tableaus which bookmark the end of each time cycle — and Nyholm’s own deft editing, which makes effective use of visual repetition and often cuts off scenes at their most climactic moments, underscore Koko-di Koko-da’s poignant exploration of the raw power of grief, and the disorienting devastation it can unleash on those left behind.