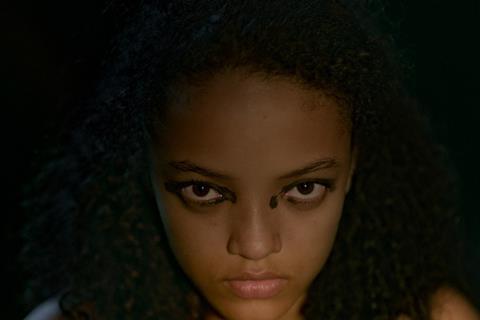 On the Caribbean shore of Costa Rica, 13-year-old Selva is caught in the hinterland between childhood and maturity. She shares a home with her weathered, creaking grandfather and, sometimes at least, his flighty girlfriend; the only female role-model Selva has. But there are other figures in her life – a girl spirit who joins her as a witness and a confidante, who may or may not be the result of Selva’s desire for a mother figure.

The natural world and Costa Rica’s rich biomass takes on a symbolic role, much of it anchored to mortality

Intimate, with a feather-light touch, Land Of Ashes (Ceniza Negra) explores mourning with a perspective which is both naively childlike and full of ancient mystery and magic. First time feature director Sofía Quirós Ubeda weaves a heady atmosphere; the film is a tropical night sweat of uncertainty. But in terms of actual story, it’s a slight, wisp of a thing which disperses like smoke almost before each scene has finished.

Films which lean so heavily on the creation of mood and the layering of symbolism tend to skew naturally towards a festival platform, and this is no exception. Selva, the short film on which this is based, also screened in Critics Week, in 2017. It went on show in numerous festivals and platforms around the world, winning several prizes, and it’s likely that Land Of Ashes will meet with a similarly warm festival reception. Beyond that, a film this gentle and contemplative might struggle to assert itself in a noisy marketplace.

Casting is key to this picture’s subtle appeal. In the role of Selva, (a name which translates as jungle or forest and binds the character closer to nature), Smachleen Gutiérrez is something of a revelation. With her huge eyes and gangly foal’s legs, she’s willowy and gauche but with a magnetic self-possession on screen which makes it almost impossible to look away from her.

Her grandfather is played by Humberto Samuels, a non-professional actor who was discovered in an old people’s home. His face, hollowed and gnarled like a storm battered tree, is filmed in a way which accentuates the years of stories which have accrued in those deeply carved wrinkles. There’s an easy intimacy between the child and her grandfather which feels unforced. A more thankless role is that of Elena (Hortensia Smith), the grandfather’s on-off girlfriend, who is forthright and feisty, but who is effectively punished for her independent spirit.

The natural world and Costa Rica’s rich biomass takes on a symbolic role, much of it anchored to mortality. A chorus of frog calls signifies a death, explains one character. It’s something that we remember when the bubbling croak of frogs suddenly breaks through the clammy night air later on in the film. But mostly, it is the reptiles that do most of the heavy lifting as the film’s main metaphorical element. Snakes – alive, dead and occasionally cooked and eaten – are woven through the story. In Selva’s mind, the human body is a little like the skin which is sloughed off to reveal a fresh new entity underneath. As a child whose adult figures are infantilised by old age, she draws comfort from the fact that in death, the skin may be discarded, but it doesn’t mean that her loved ones cease to exist.