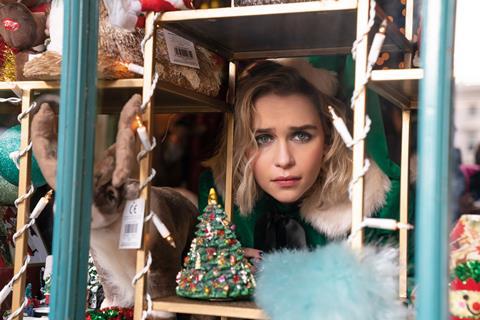 A rudderless young woman finds love, and maybe a new direction, in Last Christmas, a holiday romantic comedy as warm, soothing and disposable as a cup of hot chocolate. Shamelessly sentimental but also dedicated to the proposition that, in our dark political moment, kindness still matters, director Paul Feig’s film benefits from the adorable rapport of stars Emilia Clarke and Henry Golding, who help puncture the story’s conventional trappings.

Radiates enough goodwill to encourage viewers to be as charitable as its self-centred main character learns to become.

Last Christmas leans heavily on its soundtrack of indelible George Michael songs — and features a twist that, depending on one’s temperament, is either achingly predictable or very much in keeping with the film’s wistful yuletide spirit. But despite an uneven quality, the film radiates enough goodwill to encourage viewers to be as charitable as its self-centred main character learns to become.

Universal releases this date-night offering on November 8 in the US, targeting UK theatres the following weekend. Clarke and Golding will be the principal draw, but the late George Michael’s legions of fans may come just to savour the artist’s greatest hits along with some previously unreleased material. Love stories are in short supply at the multiplex over the next few weeks, which may provide Last Christmas with a nice runway in order to build word of mouth.

Set in London around Christmastime, the film stars Clarke as Kate, who works as an elf in a shop in Covent Garden that sells Christmas items all year ‘round. Wanting to be a singer but in the midst of an existential crisis after surviving an unspecified emergency medical procedure, she drinks too much and sleeps around, haunted by the fact that she hasn’t lived up to her early musical potential. That’s when she meets Tom (Golding), a dashing stranger who takes an instant liking to her. The cynical Kate isn’t sure she wants a serious relationship, but she finds herself drawn to his abiding sweetness.

Co-written by Emma Thompson, who plays Kate’s fussy mother Petra from the former Yugoslavia, Last Christmas exists in a magical unreality common to feel-good films of this sort. (For example, when Tom encourages Kate to volunteer at a soup kitchen, it is invariably filled with the most endearing and lovable homeless characters imaginable.) But although Feig (Bridesmaids, Spy) gives the proceedings a hearty glow, some of our world’s strife still enters into the story. The xenophobia sparked by Brexit serves as an uncomfortable backdrop for Kate, who has consciously distanced herself from her Yugoslavian roots, much to Petra’s disappointment.

As a result, Last Christmas is a romance that doubles as Kate’s personal awakening, allowing her to embrace her heritage but also to develop empathy for those less-fortunate than herself. Both she and Tom are a little too broadly conceived — she’s a quirky screw-up, while he’s a hunky saint — but the actors do their part to flesh out these roles. Just about every crucial plot point is underlined by a Michael song — it’s established early on that Kate loves his music — but Clarke and Golding have a winning chemistry irrespective of the presence of resonant chestnuts such as “Praying For Time,” “Waiting For That Day” and “Heal The Pain” clueing audience members in emotionally.

For months, there has been online speculation about whether Last Christmas contains a plot twist, and without spoiling anything, let it be said that it’s fairly obvious before the big reveal occurs what’s really going on. Some viewers may find that reveal to be manipulative or preposterous, but it does fit this story’s themes of learning to appreciate life and recognising the importance of helping others. Last Christmas wants nothing more than to be a cosy Christmas movie — undemanding but made with a certain amount of care and wit — and Feig successfully executes those modest ambitions.

He’s helped by a supporting cast that brings a little class to sitcom-y characters. Michelle Yeoh underplays beautifully as Kate’s oft-disappointed boss, while Thompson has fun working with a thick accent, even if it’s a one-joke construction that’s a little tone-deaf. (Last Christmas wants us to care about the plight of immigrants while finding Petra’s unsophisticated ways to be hilarious.) But for all its missteps, the film has its heart in the right place, optimistic enough to believe that love and compassion can help make the world a little bit brighter. Naïve, perhaps, but Last Christmas’ message certainly has its merits as we head into the holidays.