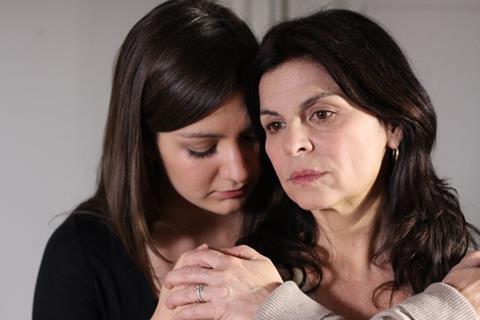 This elegant and mesmerisingly moving film is a refined and assured effort from Canadian filmmaker Catherine Martin. Simple in structure and shot with painterly compositions, it is a delicate delve into loss and remorse.

It is a haunting and intelligent production made with respect and compassion.

The combination of the precise and balanced shooting style, haunting cinematography, impressive sound and Robert Lepage’s music all points to a film very much in the art house bracket. Screening in the main competition section of the Karlovy Vary film festival, it will receive attention from festivals.

The opening scene shows proud mother Francoise (Guylaine Tremblay) relishing her violinist daughter Anna’s dazzling performance to great applause. But as soon as the applause fades the film cuts to her dead body – she has been murdered and her mother cannot contain her grief.

Devastated, she leaves Montreal and returns to her family country house in remote, snow-bound, Kamouraska. Still frequently collapsing in tears, she tries to find a way to deal with her grief. Out for a walk one day, she gives in, and simply lies down in the snow, but is found and saved by painter Edouard (Francois Papineau), a man she knew as a teenager.

His compassion slowly aids her recovery, while at her house she is also tended by ghosts of her mother and grandmother, who offer solace with the notion of depth of family history. As the seasons draw on and the land begins to thaw, so Francoise gradually comes to find a way to deal with her grief.

Guylaine Tremblay is impressive as Francoise, a woman burdened by intense grief, and it is her intense performance that carries the film. Writer-director Catherine Martin composes her shots with a stylish symmetry, while cinematographer Michel Le Veaux makes stunning use of the bleak but beautiful wintery Kamouraska locations.

At times the film is weighed down by its sense of grief and the slow development of its scenes, but equally it is a haunting and intelligent production made with respect and compassion.