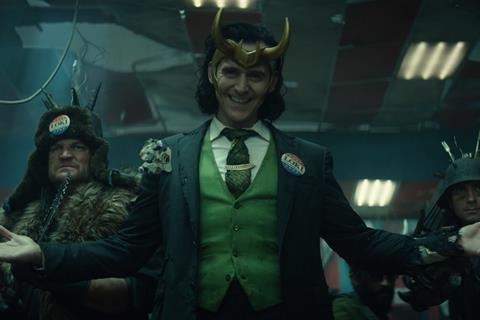 The Marvel Cinematic Universe’s most delightfully dastardly villain gets his own spinoff series with Loki, which transports the God of Mischief into an X-Files-style buddy-cop adventure. Based on the first season, there’s certainly potential here, especially in the interplay between Tom Hiddleston’s titular trickster and Owen Wilson’s laidback agent, whose job it is to hunt down temporal anomalies in order to ensure there are no disturbances in the cosmic timeline. But as with Marvel’s other recent Disney+ series, Loki mostly feels like a time-filler in between the MCU’s big-screen instalments.

This diverting show debuted on Disney+ on June 9, with a new episode dropping on subsequent Wednesdays for the following five weeks. Each Loki chapter runs about 50 minutes and features plenty of comedic back-and-forth between Hiddleston and Wilson, although soon enough Gugu Mbatha-Raw and Sophia Di Martino become as central to the storyline. As with WandaVision and The Falcon And The Winter Soldier, Loki proved popular with core fans, and Marvel has already announced a second season will be coming our way.

Loki requires viewers to recall an important peripheral moment from Avengers: Endgame: as part of their mission to collect the Infinity Stones, the Avengers went back in time to 2012, changing the past in the process. In this alternate past, Loki (Hiddleston) snagged the Tesseract, which allowed him to escape capture by teleporting away. That film never explained where the 2012 version of Loki went, but the show provides the answer, opening with him landing in the middle of the Gobi Desert. There, he’s immediately arrested by the Time Variance Authority (TVA), a top-secret law-enforcement organisation tasked with protecting the one true timeline that binds the universe.

Because this 2012 Loki created his own timeline by using the Tesseract, he is branded a Variant and set to be punished — until veteran agent Mobius (Wilson) recruits him as a partner, believing this god’s powers and craftiness might be invaluable to help catch an even-more-dangerous Variant who has eluded him. Turns out, that Variant is another Loki named Sylvie (Di Martino) — and she soon persuades Loki that the TVA is hiding something sinister about its operation.

Anyone who has watched previous MCU series on Disney+ can safely expect plenty of twists, as well as an intriguing dabbling in genres not usually associated with the flagship films. Director Kate Herron (a former Screendaily Star of Tomorrow) and creator Michael Waldron have crafted a derivative but enjoyable sci-fi/fantasy detective show in which Loki and Mobius follow clues and travel across time to track down the mysterious Variant. The two actors quickly fall into a comfortingly familiar oil-and-vinegar dynamic, with Loki trying to charm and outsmart Mobius, who ultimately holds the upper hand: he can eradicate Loki for his time crimes at any point.

Unfortunately, Loki gets bogged down in its discussion of timelines and multiverses — for instance, this Loki doesn’t know what happened to the Loki from Avengers: Infinity War — but thankfully the creative team keeps the narrative engine humming, filling the screen with eye-catching details. Specifically, Kasra Farahani’s retro-cool production design imagines the TVA as a chic 1960s office, albeit one equipped with cutting-edge technology. Part of Loki’s pleasure comes from seeing how Waldron lays out this strange reality in which Loki now finds himself. The Asgardian learns the intricacies of the TVA as viewers do, and the show drops little morsels as it goes along. (For instance, working at a place which is aware of everything that has happened in the past and the future grants employees full knowledge of the terrible climate-change disasters awaiting Planet Earth.)

Since his introduction in 2011’s Thor, Hiddleston has been a wonderfully snide Loki, and although the character eventually joined forces with the Avengers, the award-winning actor has always been more satisfying when Loki is up to no good. Perhaps not surprisingly, the Loki of Loki ends up being a noble figure once he learns the truth about the TVA, but Hiddleston is suitably commanding as a trickster who ends up caring for Sylvie. It’s pleasing to watch Hiddleston flesh out one of the MCU’s most popular characters, particularly during one brief but meaningful conversation regarding the Asgardian’s sexuality.

But Loki’s emotional core is provided by Di Martino as a lonely Loki who’s been on the run from the TVA for a long time. Sylvie isn’t used to trusting anyone, and Loki isn’t someone who can normally be trusted, but the series hinges on these two forging a tenative bond as they unravel a conspiracy that has galactic consequences. That resolution doesn’t come by the end of the first season, and the increasingly convoluted plotting risks undercutting the drama. But the appealing push-pull tension between Loki and Mobius — and the growing bond between Loki and Sylvie — may be enough to keep audiences binging.