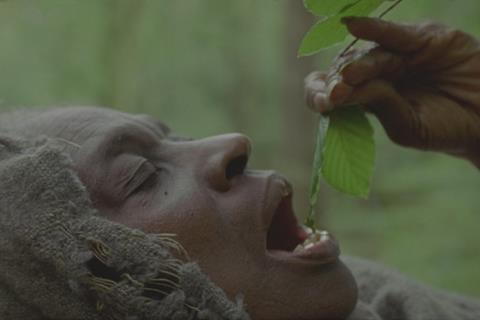 French director Damien Manivel’s quiet contemplation of the last days of Jesus’ disciple Mary Magdalene is built as much from the imagination of the viewer as it is by what he puts on the screen – he may show us what Mary is doing but it is us who must supply the thoughts that lie inside her head. This is a portrait of Mary (Elsa Wolliaston) in exile, following her retreat to an autumnal forest and, subsequently, a cave following the death of Christ, who Manivel indicates she loved, or at least aspired to love, in the physical sense as well as the emotional.

Featuring only a handful of lines of dialogue, this sort of slow cinema is not attempting to court mainstream audiences, but it has plenty to offer fans of meditative drama and was awarded the €50,000 Eurimages Lab Project award at the Les Arcs Works in Progress event. Its measured charms are likely to attract plenty more festival play and, potentially, arthouse interest after its world premiere in the Association for the Diffusion of Independent Cinema (ACID) sidebar at Cannes.

Manivel’s main approach is to study Mary in the moment, whether it’s the delicate way she removes a blackberry from a bush, repeatedly fashions tiny crosses out of leaves and grass, or how she relieves her bladder while holding a tree for support. Wolliaston - who previously collaborated with Manivel on his short film The Lady With A Dog (2010) and his Locarno best director award-winning feature Isadora’s Children (2019) - has a dance and choreography background and brings a grace to Mary’s movements, even as we can see she is also struggling with ageing. Beyond Mary, this is also an unhurried celebration of the natural world, which, even though it is pushed a little too far by the late addition of an owl that could have come from Harry Potter central casting, finds earlier resonance in the sight of wind creating waves over a fragile spider’s web, a beetle going about its business oblivious to Mary or in the gentle rustle of the trees.

The director periodically also allows more mystical elements to intrude, including memories of a different sun-dappled forest, filled with the heat of youthful desire, along with more anguished recollections of Christ, as Mary recalls his nailed feet. The mood of melancholy is enhanced by the autumnal setting, at one point shrouding Mary in mist, and two pieces of music. One, Franz Schubert’s ‘The Hurdy-Gurdy Man’, whose lyrics speak of an ageing soul and his instrument, the other Henry Purcell’s wistfully mournful ‘O Solitude, My Sweetest Choice’, both speaking to a sort of paradoxical comfort in loneliness.

The Christian iconography on screen is likely to find an echo with even the most agnostic viewers, opening the door to Mary’s contemplation, and becoming, by extension, a consideration of faith. Manivel and Wolliaston make her more than just a symbol of religious belief. Whether you have faith or not, Manivel gently brings home the power and the beauty of it for Mary, who does.