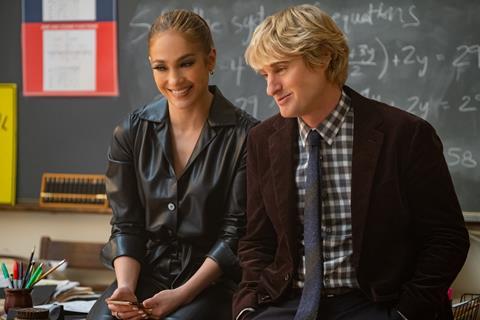 A romantic comedy that balances between a fairy-tale love story and a more practical portrait of modern courtship, Marry Me is elevated by the sweet rapport between stars Jennifer Lopez and Owen Wilson. There’s a lot of heart to this unlikely tale of a pop superstar and a humble maths teacher who fall for one another, and director Kat Coiro harkens to a bygone era when Hollywood studios would make these kinds of pleasingly frothy date-night pictures. But although Lopez no doubt intimately understands her character’s struggles with fame, the film does fall victim to the genre’s worst cliches, leaving a fresher, funnier take on the material just out of reach.

Arriving in the UK and US on February 11, this Universal release is well-suited for the Valentine’s Day crowd. Potential viewers should savour the breezy tone — not to mention its similarities to Notting Hill, another rom-com about a regular guy wooing a celebrity. Lopez, who also produced the project, will be a major draw, showing off both her star power and singing abilities.

She plays Kat, a global pop icon who is about to marry fellow singing sensation Bastian (Maluma). Meanwhile, divorced dad Charlie (Wilson) reluctantly agrees to accompany his teen daughter Lou (Chloe Coleman) to Kat’s sold-out concert, where she’ll tie the knot on stage. But before their big number, Kat learns that Bastian was unfaithful, prompting her to impulsively propose instead to Charlie, who is in the crowd holding a friend’s sign that says “Marry Me”, the name of Kat and Bastian’s big hit. Before he knows what has happened, Charlie and Kat have gotten married during the show, upending both their lives.

Based on Bobby Crosby’s graphic novel, Marry Me does nothing to downplay the preposterousness of its premise. Quite the contrary, that implausibility is the point, giving viewers a cheekily ridiculous setup and then watching how Kat and Charlie navigate the situation. For the flip-phone-using, social-media-phobic Charlie, it means adjusting to the hectic demands of a pop star’s schedule, requiring him to do photo shoots and press conferences, a camera always in his face. As for Kat, she must get used to someone who leads a “normal” life — but because her past romantic relationships have all been disastrous, she figures that it might be smart to spend time with a man who is not in her celebrity orbit.

At first, Kat and Charlie’s relationship is platonic, with Charlie good-naturedly taking part in photo ops in which they do couple activities, like bowling. But the more time they spend together, the more they develop feelings for each other. That fairly predictable turn of events is, of course, exactly why viewers will see Marry Me, and Lopez and Wilson have a flirty, grownup chemistry. The film is strongest when it juxtaposes familiar tropes against the characters’ reality, showing how these two fifty-something divorcees negotiate new love when they have been hurt before. And Lopez’s own superstardom seems to inform Marry Me as we observe Kat’s fight to stay relevant in an industry that worships youth and beauty. Underneath all the selfies, paparazzi pressures and promotional campaigns, Kat is lonely, and it’s tempting to surmise that Lopez is telling us something about her life inside a celebrity fishbowl.

But those moments of nuance tend to be drowned out by a narrative that hits all the expected story beats. And while there’s pleasure in Kat and Charlie’s relationship developing into something more serious, the obstacles thrown in their way feel forced. Even potentially fun moments meant to satirise rom-com conventions, such as an obligatory run-to-the-airport scene, don’t have enough wit or sparkle.

Wilson’s aw-shucks modesty serves him well as this high-school teacher trying to be a good role model for his awkward daughter. It’s unfortunate that Marry Me leans so heavily on the idea that Charlie is anti-social media, setting up a scenario in which he is conveniently diametrically opposed to Kat’s hyperconnected essence. But Coiro (And While We Were Here) doesn’t dig too deeply into the dangers of being extremely online, and likewise the picture’s exploration of the downsides of superstardom comes across as fairly shallow.

A film like Marry Me doesn’t need to worry much about believability — getting swept away in the fantasy is what matters — but because the script tries to catalogue the difficulties of juggling relationships, a career and family, one wishes a smarter, more thoughtful tone could have asserted itself. In the end, Marry Me can’t wed its conflicting ambitions, resulting in a likeable picture that’s hard to love.

Screenplay: John Rogers & Tami Sagher and Harper Dill, based on the graphic novel by Bobby Crosby