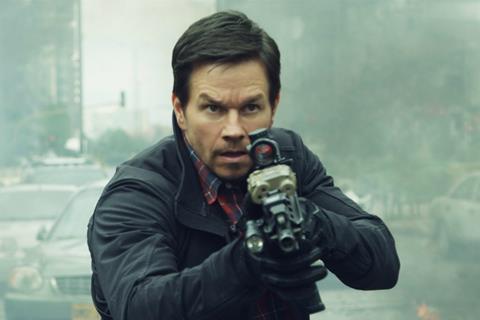 The adrenaline never stops pumping in Mile 22, a superficially kinetic thriller that simultaneously attempts to be politically savvy and an ultra-macho shoot-‘em-up. That juggling act proves too sophisticated for director Peter Berg who, in his fourth collaboration with Mark Wahlberg, again demonstrates his sufficient skill at crafting dynamic suspense sequences. But this tale of elite CIA operatives transporting a high-level asset through dangerous urban terrain goes only so far on its stylishness — the relentless visual onslaught and empty posturing soon turn lethal.

Much like Lone Survivor and Patriots Day, Mile 22 shamelessly parades its view of American exceptionalism.

Opening August 17 in the States before hitting UK screens on September 19, this STX release will rely on Wahlberg’s star power. He and his frequent director enjoyed their biggest hit together with 2013’s Lone Survivor ($155 million worldwide), but were less successful with their two 2016 efforts, Deepwater Horizon ($122 million) and Patriots Day ($51 million). Fans of hardcore action will be pleased with Mile 22, and modest grosses seem likely.

Unlike Berg and Wahlberg’s three previous films, Mile 22 isn’t based on a true story. It follows the high-strung James Silva (Wahlberg) as he leads his CIA team to track down some missing caesium that could be used for an act of international terrorism. Silva’s search leads to Li Noor (Iko Uwais), a Special Forces agent for a fictional Southeast Asian nation who agrees to divulge the caesium’s whereabouts once Silva spirits him out of the country.

Naturally, there are many heavily-armed factions that don’t want Noor escaping, which sets the stage for a tense showdown between Silva’s team and their adversaries through populated city streets and tenement buildings. Berg and his editors Colby Parker Jr. and Melissa Lawson Cheung deftly ratchet up the action to emphasize every headshot, car crash and bone-crushing kick. (Uwais, the star of the Raid films, provided some of the fight choreography.)

When Mile 22 is simply hurtling through this fictional city, bullets and blood flying cathartically, the movie radiates confidence and electricity. Throughout, we see how Silva’s ground team is assisted by an eye-in-the-sky surveillance unit led by a no-nonsense John Malkovich, who helps Silva navigate out of tight scrapes. Berg doesn’t have the soulless showmanship of a Michael Bay or the poetic artistry of a Michael Mann, but he’s a wizard at brutally efficient action scenes and synthesizing complicated military strategy in a few quick cuts.

Where he’s far less proficient, however, is in developing characters or modulating his movies’ gung-ho patriotism. Much like Lone Survivor and Patriots Day, Mile 22 shamelessly parades its view of American exceptionalism. This rah-rah attitude is articulated by Silva during interludes in which he’s being grilled by superiors; in these scenes, he defiantly declares that his team must follow its own morally slippery code in order to stop the bad guys. Mile 22 has no interest in interrogating this go-it-alone mind set, resulting in an exciting but hollow cinematic experience that unambiguously treats Silva and his team as ass-kicking supermen with a license to do whatever is required — ethics or laws be damned.

Wahlberg provides the same regular-guy bluster he’s demonstrated in previous Berg films, and his wrecking-ball urgency can be compelling. (The film hints that the character may suffer from some mental affliction, but it plays as little more than a gimmick during the film.) Better is Uwais, who portrays an enigmatic figure whose motives remain murky — plus, he gets to wield the martial-arts prowess that was so stunning in both Raid films. (It’s almost an homage to The Raid when he and Silva’s team are pinned down by their enemies in an apartment complex.)

Also strong is Lauren Cohan as one of Silva’s trusted lieutenants. Screenwriter Lea Carpenter tries to provide her character with a sympathetic backstory — her ex-husband, half a world away, is cruelly blocking her from getting custody of her beloved daughter. But, because Berg only sees these characters as avatars fearlessly putting themselves into harm’s way, Cohan is most commanding when she’s shooting a gun or engaging in hand-to-hand combat. He’d rather have heroes than human beings.