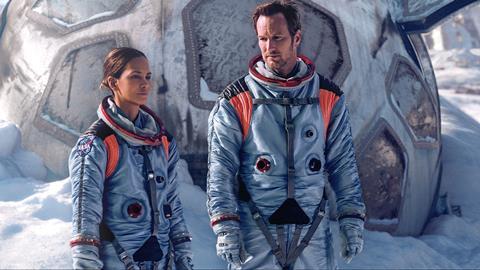 Popcorn-cinema auteur Roland Emmerich finds new ways to wreak havoc across the globe in Moonfall, a jolly disaster film that chronicles humanity’s impending doom as the moon comes hurtling towards Earth. With his patented passion for over-the-top spectacle and tongue-in-cheek cheesiness, the Independence Day director draws from plenty of sci-fi landmarks — 2001, Gravity, Armageddon — to tell the story of a few scrappy individuals determined to stop this lunar apocalypse. But although Moonfall is packed with such giddy good cheer that its abundant narrative cliches and dismal dialogue are almost part of the charm, even game performances from Halle Berry and Patrick Wilson aren’t enough to save the day.

The film hits UK and US theatres on February 4, and will probably see solid grosses before The Batman opens in a few weeks’ time. Berry and Wilson supply star power, but the main attractions are the pleasingly daffy premise and the anticipation of seeing what planetary devastation Emmerich has in store.

It has been 10 years since disgraced American astronaut Harper (Wilson) saved crew-mate Fowler (Berry) after their space shuttle was attacked by a strange interstellar force while orbiting high above Earth. (NASA blamed the mission failure on Harper, covering up the truth of what really happened.) His life now in shambles, Harper is approached by conspiracy theorist Houseman (John Bradley), who believes that the moon has fallen out of its orbit and is veering toward Earth, which would mean the end of the human race. Soon, the world agrees with Houseman’s findings, and Harper and Fowler, who haven’t spoken in the last decade, must work together to destroy the moon.

Following the tenets of disaster films — and serving as an unwitting companion piece to the recent extinction-level-event satire Don’t Look Up — Moonfall balances the high-stakes suspense of Earth’s imminent destruction with the main characters’ personal dramas. Both Harper and Fowler have complicated family lives — each is divorced, and each will be separated from their children during this ordeal — and there’s also a long-festering tension between them. (He feels that she didn’t back him when NASA launched its smear campaign against him after their mission; she insists she blacked out and didn’t see what occurred.) But Emmerich, who cowrote the screenplay, has never been much for nuance, and as a result the characters’ conflicts all feel fairly generic — an easy way to create some pathos when they and their loved ones are put in danger.

What helps are compelling performances from the leads, which acknowledge the narrative’s inherent ludicrousness while lending genuine feeling to the proceedings. Moonfall serves as Harper’s shot at redemption, and Wilson’s manly earnestness is awfully appealing as the character realises the fate of the world is in his hands. Likewise, Berry plays Fowler as a capable NASA head who refuses to resort to nuclear weapons to obliterate the moon, which would produce deadly amounts of radiation. Both actors transcend the film’s B-movie trappings to craft grounded individuals thrust into harrowing, preposterous circumstances.

Several twists await the viewer — starting with what NASA has known about the moon since the 1960s, and concluding with what our heroes discover once they travel to the lunar surface. But the revelations somehow manage to be both fairly obvious and incredibly convoluted. Not that the plot matters: indeed, Moonfall’s superficial appeal is encapsulated in its title, with Emmerich clearly relishing the opportunity to pummel coastal cities with towering tidal waves and bombard picturesque inland areas with flaming chunks of the moon that strike like missiles. It’s easy to enjoy the film’s uncomplicated orgy of explosions and calamities, and editors Adam Wolfe and Ryan Stevens Harris give the action sequences a gleeful rush as the moon gets closer and closer to Earth, affecting the planet’s atmosphere in sometimes imaginative ways.

If Moonfall was a little wittier or more inspired, its ample carnage might be exhilarating. Instead, there’s too much that’s stale in the execution — whether it’s Bradley as the de rigeur comic relief or casting Michael Pena as the predictably insensitive new husband of Harper’s ex-wife. Even the final confrontation with the moon plays out like so many other sci-fi action set pieces. Emmerich has always laced his disaster films with a leavening silliness, inviting the audience to treat the end of the world as a rollicking rollercoaster ride. But after watching Moonfall, viewers may feel a little like Earth: bludgeoned and worse for the wear, reeling from the onslaught that just occurred.