'My Entire High School Sinking Into The Sea': Toronto Review 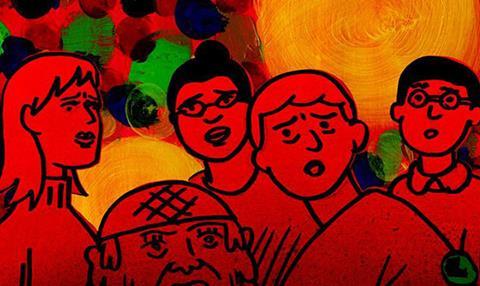 For many sufferers, teenage angst can feel as urgent and cataclysmic as a post-apocalyptic event. Writer-director Dash Shaw makes that dilemma literal in his amusing feature debut, a lively animated film that mixes high-school insecurity with the death toll of a disaster film. My Entire High School Sinking Into The Sea is slight and uneven, but its quirky, handmade aesthetic nicely conveys its characters’ adolescent vulnerability and restless spirit.

Even when the storytelling falters, the animation contains enough drama and surprises to compensate

Premiering in Toronto’s Vanguard section, My Entire High School will court buyers via a hip voice cast which includes Jason Schwartzman, Reggie Watts, Maya Rudolph, Lena Dunham and Susan Sarandon. Shaw’s background as a celebrated cartoonist and graphic novelist will also serve as a selling point as well, with his first feature having all the hallmarks of a cult curio sought out by fans of left-of-centre animation.

As the film begins, teen best friends Dash (Schwartzman) and Assaf (Watts) are dorky outcasts at Tides High, busy putting together their self-published high school newspaper when a wedge is driven between them: Their editor Verti (Rudolph) has developed feelings for Assaf, making Dash feel like the third wheel on their small editorial staff. But Dash’s jealousy is soon replaced by terror when an earthquake hits their California school, sending the building tumbling into the Pacific Ocean.

Drawn over the course of six years — and supervised by lead animator Jane Samborski — My Entire High School is more visually impressive than it is narratively arresting. Only clocking in at 77 minutes, Shaw’s film doesn’t have much that’s new to say about first love, male rivalry, cliques or the drudgery of high school. But even when the jokes fall a bit flat or the storytelling falters, the animation contains enough drama and surprises to compensate.

The movie varies its look, occasionally aspiring to the dark contours of a graphic novel while at other times evoking the wistfulness of a watercolour painting or the kaleidoscopic, hypnotic pleasures of a cartoon acid trip. (These stylistic shifts are sharply accented by Rani Sharone’s propulsive electronic score.) Throughout, the characters’ twitchy, hand-drawn primitivism suggests their feelings of inadequacy and incompleteness, and it’s telling that the way Dash, Assaf, Verti and others physically appear on screen is more resonant than anything that comes out of their mouths.

That said, Schwartzman embodies the same humorously sullen adolescence he brought to bear in a similar role as a moody child in Fantastic Mr. Fox. Dash can be a petty, unlikable protagonist — especially when he seeks revenge on what he perceives to be Assaf’s betrayal of their friendship — but the actor’s deadpan resignation gets laughs. Equally muted in a delightful way is Watts as Assaf, who is charmed by the nerdy Verti, voiced with a touching sweetness by Rudolph.

My Entire High School is strongest once the school falls into the ocean and our heroes must work their way up to the building’s top floor in order to keep from drowning. Unlikely alliances are formed — Sarandon provides just the right amount of no-nonsense grit as a resourceful but crabby cafeteria worker — and action set pieces are flecked with touches of the surreal and macabre. Despite wry scenes of sharks devouring teenagers and people falling from the sky to their doom, there isn’t much sense of stakes in this ironic appropriation of Poseidon-like calamity, which keeps My Entire High School feeling like a diverting novelty rather than an inspired, emotionally invested adventure. But from its cheeky Peanuts homage to its unpredictable visual palette, Shaw’s film ends up as peculiar and oddly winning as its misfit characters.