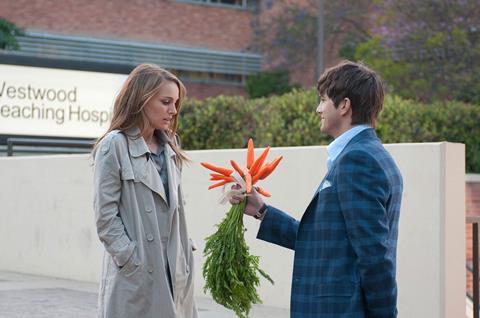 A nice sense of comedic background detail and the winning chemistry of stars Natalie Portman and Ashton Kutcher power No Strings Attached, a comedy in which two young adults test a pact to avoid any deeper feelings while enjoying each other’s company purely for sex. Bantamweight but fun throughout, the movie connects consistently, both on personality and scene-to-scene joke-writing.

Portman, who is rapturously photographed throughout, gets to showcase her underappreciated comedic timing.

It remains to be seen whether No Strings Attached will benefit from a Black Swan “bump,” which just this weekend added another 740 screens, or whether Stateside audiences will suffer some degree of performer fatigue from being presented such a wildly divergent portrait of Portman, and her Golden Globe-winning turn in that film.

Audiences recently gave something of a cold shoulder to Love & Other Drugs, another sex-saturated comedy which in no small part dealt with a couple laboring to avoid a conventional relationship. Generally positive word-of-mouth and a more streamlined marketing campaign should benefit this film, though, and make it a solid theatrical performer with significant holdover ancillary appeal.

A couple breezy set pieces establish a history between Emma Kurtzman (Portman) and Adam Franklin (Kutcher), teenage camp friends whose romantic curiosities orbit one another but never align until the pair reunites many years later in Los Angeles. Emma is in medical residency, Adam is a production assistant and would-be writer, as well as the son of an aging, self-centered TV star, Alvin (Kevin Kline). A drunken night of attempted booty calls leads Adam back to Emma, and a curious arrangement is struck.

Wanting to avoid the attendant emotional muddle of an actual relationship, Emma proposes a mutual-use physical relationship. Adam accepts, even though he immediately evidences a level of besotted attraction, bringing Emma a balloon that reads “congratulations” after their first physical encounter. Hassle-free fun works for a while, but more profound feelings eventually bubble up.

This same conceit — at once fluffy and throwaway, but also interested in shifts in the modern dating landscape impacted by technology and many couples waiting until much later to get married, if at all — could suffer mightily in lesser hands. Veteran director Ivan Reitman, however, is a skilled comedy craftsman, able both to build engaging scenes and maintain some semblance of an emotional throughline.

He’s aided by a script, from debut screenwriter Elizabeth Meriwether, that doesn’t overreach for false slapstick, but instead puts a fairly substantive spin on the reasons for particularly Emma’s defense mechanisms.

If there’s a complaint, it’s that Adam seems game for a relationship so quickly, and so the movie misses a chance to dig into and as deeply explore the dance of unstated feelings in such an agreement. (A subplot involving Alvin dating Adam’s ex-girlfriend marks time, seemingly an exercise in needless parallelism.) Still, No Strings Attached is a movie that has the courage to trust in its characters (and the stars playing them) enough to let them be a bit disagreeable or cavalier in their treatment of others, knowing that the audience will be eventually won over by the honest expression of their viewpoint.

The conventional wisdom is that Los Angeles is “overshot,” but Reitman and his crew pick fantastic locations — from the marina and a downtown market to a decked-out W Hotel and the county museum of art’s relatively new deco street lamps — to craft a beautiful looking movie, definitely a step or two up from most studio comedies.

Portman, who is rapturously photographed throughout, gets to showcase her underappreciated comedic timing. She evinces a nice rapport with Kutcher, who can pull off rakish, easygoing, himbo banter almost better than anyone else in his generation. Supporting cast members deliver uniformly strong performances as well, especially Kline, who late in the film pulls off a rather remarkable seriocomic confession while his character is strung out on painkillers.