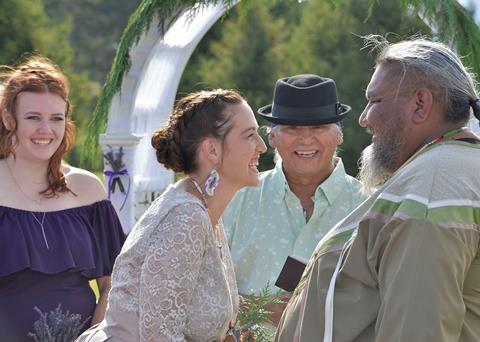 Assumptions about gender, culture, identity and the ways in which individuals heal their own psychic wounds all come into provocative focus in Non Western, the third feature by Mexican-born film-maker Laura Plancarte. Following on from Tierra Caliente and Hermanos/Siblings, both set in her home country, Plancarte here studies a couple trying to find happiness against the background of a traditional Native American culture. Playing online in Visions du Réel’s international feature competition, Non Western is an empathetic observational documentary with a number of stylised elements that heighten its dramatic content (credits include a production designer). But the film’s closeness to its subjects, their conflicts and their troubled back stories makes for an insightful, quietly moving study not just of character but of a fraught and under-documented aspect of contemporary American life.

The film’s central figures are Nanci and Thaddeus (Thad), a middle-aged couple who have known each other for roughly a year, and are now setting up home together in rural Montana and planning to marry in a traditional Northern Cheyenne ceremony, in keeping with Thaddeus’s origins. Nanci is a white woman who has a lifelong affinity with Native American culture, identifying as Lakota since her early teens. Thad is a working-class army veteran with a traumatic background, having been rejected by his family when he left their reservation. What becomes clear when the couple set up home, together with Nanci’s teenage children Rhiannon and Tristan, is that Thad has very old-fashioned views on gender roles, and expects Nanci – who has a PhD and works in the field of early childhood studies – to be his helpmeet according to tribal custom.

The couple’s meeting with Thad’s elderly mother (Johanna M. Red Neck, only ever filmed from behind) makes it clear that Nanci faces a struggle if she wants to continue being what her prospective mother-in-law sceptically terms, in invisible quotation marks, a ‘modern woman’. While this is one of several scenes that seem expressly staged, or even part-scripted or, it certainly hits a note of emotional authenticity, with Nanci’s upset and frustration emerging very visibly.

Plancarte films the couple and their circle in different settings, indoors and out, taking in Thad’s downtime with his friend Russ (Russell Smyth), a white rancher coming into conflict with traditional land rights; we also meet Walker, Nanci’s oldest son, and her mother (Maya E. Marsh). What emerges fascinatingly is that there is nothing straightforward or given about people’s relation to heritage: just as Nanci discovered Native American identity through an earlier relationship of her mother’s, Thad was for a long time estranged from his roots, as was his mother, who talks movingly about being raised in a Catholic mission. It is seemingly because she had to later reclaim that Native tradition for herself that she clings so determinedly to its harsher tenets. At any rate, as suggested by the title – and by a wry Ben Rogers country number, ‘Cowboys and Indians’ – we’re a long way here from the cut-and-dried picture of racial/cultural difference purveyed by so many Westerns.

Plancarte’s narrative moves gradually towards the possibility of reconciliation, and hope for a stable if no doubt problematic future for the couple; however, a late discussion scene between Thad and his mother feels like an artificially imposed moment of closure, with the key questions expounded just that bit too neatly and therapeutically. Shot with a distinctly poetic touch by Franklin Dow, this visually spare film nevertheless has elements of impressionistic artifice, notably in slow-motion sequences (close-ups of Thad showering and of one of the couple’s dogs) and in the intermittent use of soft focus around the edges of the frame. Only occasionally obtrusive, these touches don’t, however, push the film towards the realm of the fictional - in the manner of, say, Roberto Minervini’s Texan drama-docu hybrids – but add a contemplative note to a drama that brings its subjects vividly to life while holding back from profiling them too conclusively.

Part of the International Feature Film Competition, ‘Non Western’ plays in www.visionsdureel.ch between April 25 and May 2