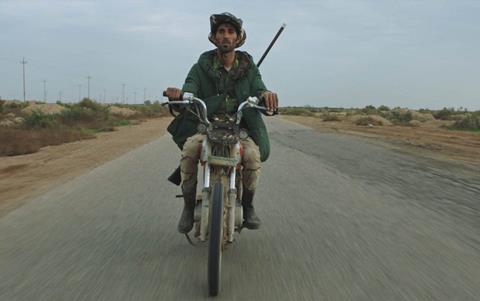 Gianfranco Rosi’s sombre, forceful new documentary, shot on the borders of Iraq, Syria, Kurdistan and Lebanon, recounts a conflict that remains just off-screen by charting some of the lives irrevocably touched by it, or pursued in defiance of it.  Rosi used a similar method in the first part of his Berlinale Golden Bear winner Fire At Sea, circling around the tragedy that was playing out on overcrowded boats in the southern Mediterranean. There, the story arc was like a whirlpool spiral, converging on the horror at its centre; here the pictures flows in a series of vignettes.

Rosi’s brand of observational documentary, which becomes more distinct with every film, is both evocative and restrained

This more impressionistic approach, coupled with the film’s requiem mood and pacing, and an ethical issue detailed below, could challenge audiences who had warmed to the interconnected characters and stories of Fire At Sea. Notturno, which will play at the Toronto, New York and London festivals, among others, after its Venice debut, is a sensitive, open-ended film which rewards patient, receptive viewers with images of great beauty and a human vision of profound empathy. There’s no musical soundtrack, but sound becomes a kind of music in the film, whether it’s the that of soldiers’ boots on a wet parade ground, the rumble of traffic across a half-submerged pontoon bridge, or the gale from which a teenage hunter with big, sad eyes shelters under a wind-battered tree.

Rosi’s brand of observational documentary, which becomes more distinct with every film, is both evocative and restrained. As always, the director (who also acted as his own DoP and sound recordist) avoids voice-over narration or captions – apart from an opening text that sets the desperate contemporary plight of this ancient land in the context of the Great Powers’ carve-up of the Middle East following World War I. The spread of locations means that we sometimes struggle to supply the context that, in Fuocoammare, Sacro Gra or Below Sea Level, came with our knowledge that the whole film was shot in Lampedusa, or around Rome’s motorway ring road, or in Slab City, California.

Where is the duck hunter we meet at the beginning and end of Notturno, sliding through the marshes in his skiff, silhouetted by the burning oil rigs on the horizon? What town are we visiting when we see two horsemen spur their steeds at a gallop through half-empty streets, and is it the same town that features in the film’s most tender scene, in which a street singer is dressed by his young wife before leaving the house to chant orisons to Allah? Is this Iraq, Syria or Kurdistan? Are these people Sunni or Shiite?

The lack of answers is, of course, Rosi’s point: to identify would be to separate and classify, and thus to dilute the communion of suffering, but also the life force that unites these border-dwellers. By refusing to explain, Rosi allows sequences to resonate and reach out like chiming chords. An abandoned fort in the desert that might have featured in Lawrence Of Arabia turns out to be a former prison, where a group of mothers gather to lament the sons who died within its walls. Later, another group of much younger women, Kurdish Peshmerga fighters, fix their hair in their shared dorm while outside, their companions keep watch over a vast, empty landscape. In both cases, the enemy is invisible. Both sets of women inhabit a kind of limbo, one emotional, another operational.

Only in two places does Rosi’s reticence feel a little problematic. The first, set in a psychiatric hospital, is a segment that the director returns to more than once in the course of the film. It shows a group of inmates rehearsing a play written by the doctor who directs their performances. It’s a play which consists of long declamatory speeches by figures representing the forces that fight for control of the ‘homeland’. It seems to be making a point about the absurdity of war, but Rosi’s point is unclear: is the doctor’s manipulation of his patients in the service of a political message supposed to make us feel uneasy?

The second ‘difficult’ sequence is set in a light-filled classroom where we sit in on a series of interviews between a child psychologist and a group of elementary-school-age Yazidi children who were held captive with their families by ISIS. The cruelty they experienced there, and the atrocities they witnessed, are expressed not only in their replies to the therapist’s gently probing questions, but in the drawings they have been encouraged to create, which are all the more shocking for their naif, childlike style. Access is all in Rosi’s documentaries, and the access he achieves, winning the confidence of his subjects so that it’s as if he isn’t there while filming their most intimate moments, is astonishing. But access has its limits. While our hearts open up to these traumatised kids, being there with them in the room at this delicate moment doesn’t feel quite right.