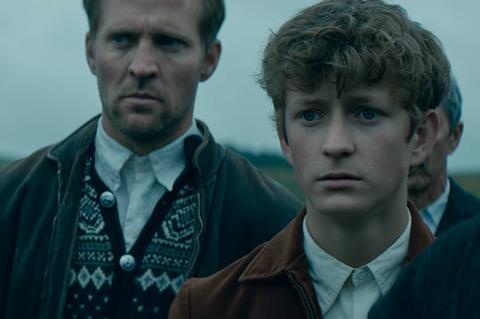 A recently widowed Swedish man (Stellan Skarsgard) retreats to the Norwegian wilderness to heal, but finds instead that memories of an unsettled period in his childhood crowd into the space he has left between himself and the rest of the world. Strikingly photographed, sensitively acted but torpid in its pacing, this is filmmaking which will require a degree of patience from its audience.

A slow journey towards the eventual acceptance of the past

The slow-burning, eddying story and the episodic approach owes something to the film’s literary origins: it is adapted from a multi-award-winning novel by Per Petterson. Moland strips down some of the symbolic dualities of the original source – in the book there were two sets of twins, in the film just one – but this languid adaptation should nonetheless please some fans of the novel. This is the fourth picture from Moland to screen in competition at Berlin; the most recent was In Order Of Disappearance, which also starred Skarsgard (and which he just remade as Cold Pursuit with Liam Neeson). Further festival bookings seem likely, and the Skarsgard name, plus the pulling power of Petterson’s book, could lure fans of laconic, archetypally Scandinavian mood pieces into arthouse theatres.

The year is 1999, and Trond has hunkered down in a cabin for what seems like a permanent hibernation. After exchanging curt pleasantries with his neighbour Lars (Bjørn Floberg) one evening, Trond recognises the man as someone he last saw as a child, then the ten-year-old younger brother of his buddy Jon. This encounter, together with some very pointed bits of symbolism – the camera lingers on nettles which must be grasped, and on snow which bears down on branches like the weight of unspoken secrets – prompts Trond to re-examine the painful memories of the summer of 1948, the last time he saw his father.

Much of the film unfolds in an extended flashback: Jon Ranes plays the fifteen-year-old Trond; Tobias Santelmann is the outdoorsy father that the boy clearly idolises. This is all very well, but it does mean that Skarsgard, the most experienced and capable member of the cast and arguably one of the film’s key selling points, is rather underused.

A local tragedy during the summer of 1948 binds Trond and his father closer to the parents of Jon and Lars. But as they slog together on Trond’s father’s lumber, tacit tensions mount between the adults. Timber is yet another element which has a symbolic resonance here. Trond’s father, comments a neighbour pointedly, is taking a risk with his timing. The felled trees, like so much in life, may float, but run the risk of sinking.

The score has a percussive, organic quality which seems to have been foraged from the water and woodlands in which these lives intertwine – it brings an interesting textural detail to a film which is strikingly beautiful yet can be quite inert. Sound design, leaning heavily on ominous rumbles of thunder and creaked warnings from tree branches, is less successful.

Because of the languorous pacing, the film seems to run out of steam before the end. A scene in which Trond and his mother travel to Karstad and buy him a suit might have been pivotal in the book but here feels like unnecessary procrastination on this slow journey towards the eventual acceptance of the past.