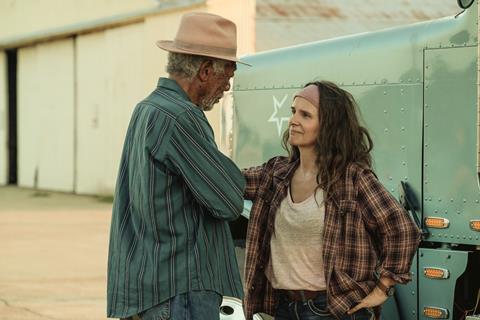 Juliette Binoche may play a seasoned truck driver with a firm grip on the wheel, but Paradise Highway proves to be an unsteady ride, guided by intriguing ideas but hampered by generic tendencies. This stripped-down thriller explores the world of human trafficking, casting Oscar-winner Binoche as the unlikely protector of a runaway girl. Making her feature debut, Norwegian writer-director Anna Gutto wants to tell a story about loneliness, survival and how women pick up the pieces of their shattered lives, although those themes are hitched to a plot that travels familiar terrain.

Paradise Highway, which opens in the US on July 29 before screening in Locarno, represents an intriguing change of pace for Binoche, joined by Frank Grillo and Morgan Freeman. But the picture has received little buzz, despite its pertinent subject matter, so modest theatrical grosses can probably be expected before it transitions to the small screen.

Sally (Binoche) is a no-nonsense truck driver who has few human connections beyond her fellow female drivers and her beloved incarcerated brother Dennis (Grillo), who will be getting out of prison in a few days. However, before he’s freed, he asks her to pick up a “package” for him — if she doesn’t, some threatening men will kill him on the inside — and so, reluctantly, she arrives at the pickup spot.

To Sally’s surprise, though, she discovers that the illicit cargo is actually a girl, Leila (Hala Finley), who is part of a trafficking ring. After unexpected gunshots and a frantic escape, Sally finds herself transporting the frightened Leila, determined to get her to safety even as the dangerous heads of the trafficking ring start closing in. Meanwhile, Gerick (Freeman), a retired FBI agent who has devoted his long career to rescuing those ensnared by sex traffickers, is also on Leila’s trail.

A veteran of the theatre, Gutto uses the conventions of the crime-thriller to study Sally, a loner running from a troubled past. The details of her childhood will eventually be revealed, but it’s clear that Sally has responded by shielding herself from other people, preferring the solitude of the open road. Binoche brings grit and defiance to the character, who initially resents being drawn into Leila’s predicament. Predictably, though, Sally and Leila will soon become a de facto family, two damaged souls seeking solace.

Unfortunately, Paradise Highway’s narrative — a combination of a detective film and a road movie, mixed with elements of the chase picture — isn’t especially riveting. Threadbare conventions abound, including the fact that the crusty Gerick is saddled with a naive rookie partner (Cameron Monaghan), their fractious rapport typical for this type of crime drama. The obstacles Sally encounters as she tries to meet up with her brother are fairly standard, and a late-reel twist is easy to see coming down the pike.

What gives the picture its spark, however, is Gutto’s curiosity about Sally’s milieu. Paradise Highway spends time in weigh stations and overnight truck stops, painting a picture of a community of women drivers who have learned to be as tough as their male counterparts as they battle sexism and sexual harassment. On its margins, the film can be an affecting look at working-class poverty and women who often have to fear for their well-being. (In one memorable scene, Sally gives Leila detailed instructions on how to prepare the truck at night to ensure no one breaks into the cab and assaults them.) One suspects that the film’s grimy B-movie trappings are merely an excuse for Gutto to talk about the need for connection in a threatening world.

But it’s hard to fully invest in Paradise Highway’s emotional underpinnings when the characters lack nuance and the plotting fails to surprise. Binoche can’t quite bring Sally to life, despite exuding the same raw intensity she has often exhibited in her most daring work. (If nothing else, it’s fascinating to watch Binoche in this sort of down-and-dirty genre project.) Likewise, because Leila is too much of a construct — a symbol of the childhood innocence that was taken away from Sally long ago — Finley never fully bonds with her more experienced co-star. Paradise Highway ends with a dedication to survivors of human trafficking “and the brave people who step in to help.” That’s a touching sentiment, but this film’s honourable intentions aren’t enough to drive the story forward.