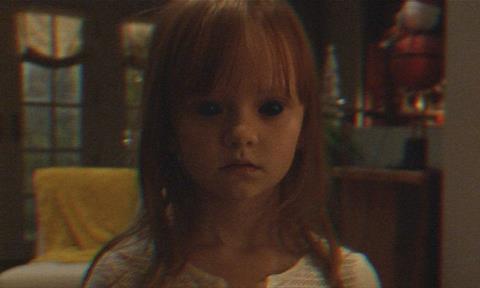 In the six years since the original Paranormal Activity became a sleeper sensation, the franchise has done an impressive job squeezing every bit of juice that it can out of a fiendish gimmick. With Paranormal Activity: The Ghost Dimension, the fifth film in the series (not including 2014’s spinoff The Marked Ones), it’s clear this haunted-house conceit can’t go on forever, however, so it’s probably just as well that the producers have insisted this will be the final chapter. If this indeed is Paranormal Activity’s send-off,this wobbly, consistently mildly unsettling sequel possesses enough of the attributes that will remind the faithful what made these films reliably clever Halloween staples.

Opening in the US on October 23, The Ghost Dimension will play on far fewer screens than its predecessors, the consequence of several theatre chains boycotting the movie to protest Paramount’s decision to unveil this sequel on VOD earlier than normal. That, in conjunction with the fact that Paranormal Activity 4 and Paranormal Activity: The Marked Ones were the two weakest performers in the series, suggests that this franchise’s commercial heyday has passed, the studio no doubt hoping that VOD sales will help make up for diminishing theatrical grosses.

At this late date, it’s probably a waste of time to reiterate this series’ fundamental limitations. The incessant use of found footage strains credibility — how many terrified people would actually keep carting a camcorder around with them? — and the individual movies’ narrative structures don’t vary too much. (And there’s also the question of why the inhabitants of these spooked homes don’t just leave, although The Ghost Dimension addresses this somewhat satisfyingly.)

And yet, the new film, which is the feature directorial debut of Gregory Plotkin (who edited four previous instalments), offers just enough dependably creepy-crawly moments. The Ghost Dimension isn’t exactly frightening — the setup is so well-worn now that it’s hard to be particularly startled by what transpires — but it’s able to wring sufficient dread out of this franchise’s go-to fears: the demonic possession of an innocent person; and the unsettling certainty that something is lurking inside the house at night.

The franchise’s signature sequel, 2011’s Paranormal Activity 3, ingeniously upped the series’ found-footage conceit by introducing a camera that oscillated around the room, creating a nerve-wracking game of peek-a-boo as disturbing images slowly moved in and out of the frame. The Ghost Dimension’s formal wrinkle is to have Ryan find a bulky 1980s-era TV news camera that, intriguingly, seems capable of detecting energy sources that can’t be perceived by the naked eye. Conveniently, this allows the characters (and the audience) to spot the spooky outline of spectral figures that walk around the house at inopportune times, and Plotkin does a good job building suspense as series nemesis Toby begins to make his presence felt.

When writer-director Oren Peli dreamed up the first Paranormal Activity, the secrets to its success were not dissimilar to those of The Blair Witch Project a decade earlier: Both films incorporated unknown actors and were presented as documentaries, the eschewing of big-budget effects and the emphasis on realism crucial in stripping away the protective artifice that diminishes plenty of contemporary horror films. Peli handed over the reins after the original instalment, staying on as a producer for the sequels, but the first film’s underlying qualities have remained ever since, with different filmmakers playing with the notion that, sometimes, nothing is scarier than a big, quiet, seemingly mundane room in the middle of the night as something slightly ominous happens in the background.

That said, the effects work is a little more elaborate on The Ghost Dimension, probably owing to the fact that this is the franchise’s grand finale. Even then, though, Plotkin keeps the focus on his cast’s naturalistic performances, generating laughs initially from Murray and Gill’s bro-heavy rapport before slowly increasing the anxiety and unease once the characters realize that Toby will not be stopped.

Overseeing the sixth film in a series that’s produced a new movie almost every year, Plotkin is mostly adhering to formula, and so even The Ghost Dimension’s big ending mostly just echoes previous instalments’ shocking conclusions. Toby isn’t the only phantom wandering through this film — there are also the audience’s collective memories of the Paranormal Activity chapters that came before. This sequel does its job well enough, but it’s probably time for all involved to give up the ghost.