With Elizabeth Banks stealing the show, Lionsgate’s goofy Power Rangers recycles superhero blockbusters of the past 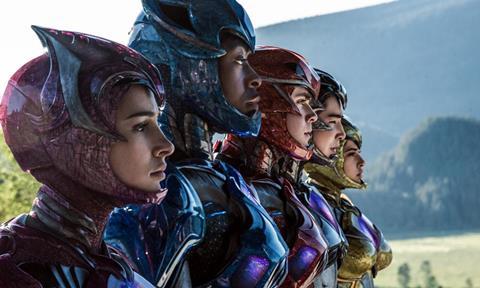 A teen group therapy session disguised as a superhero movie, Power Rangers is numbingly predictable and cynically made, recycling myriad blockbuster tropes but draining their adolescent pleasures in the process. Based on the loony Japanese series, which morphed into an equally goofy American TV show, this more sincere big-screen version wants to honour its characters’ high-school angst while maintaining the property’s campy spirit. However, neither tone works.

Opening globally from March 23, this Lionsgate release will face domestic competition from CHiPS, Life and Ghost In The Shell, although Power Rangers may skew a little younger than those other marquee titles. Supporting turns from Bryan Cranston, Elizabeth Banks and Bill Hader lend some star power, but probably the film’s biggest commercial strength is audiences’ familiarity with the brand.

Taking place in Angel Grove, California, Power Rangers brings together five mismatched teens — including popular, troubled jock Jason (Dacre Montgomery) and nerdy outcast Billy (RJ Cyler) — who are mysteriously drawn to an alien spaceship buried deep inside an abandoned mine. Once there, they learn from Zordon (Cranston) and his smart-ass robot assistant Alpha 5 (voiced by Hader) that they’ve been chosen to be Power Rangers, a galactic police force that protects each planet’s all-powerful crystal from falling into the wrong hands. But first, these teens must learn to work together.

Director Dean Israelite (Project Almanac) brings a hip, pseudo-edgy vibe, presumably to help separate the film from Super Sentai, the original Japanese TV series that debuted in 1975 and whose footage was repurposed for the popular 1990s American series Mighty Morphin Power Rangers. Knowingly silly, those series have been transformed into a wise-cracking movie adaptation that occasionally mocks the conventions of superhero films while trying to take seriously its characters’ teenage insecurities.

Along with Jason and Billy, the Rangers comprise an ostracised cheerleader (Naomi Scott), the perpetual “new girl” (Becky G) whose family keeps moving from town to town each school year, and a cocky extrovert (Ludi Lin) who is hiding the fact that he must care for his ailing mother. Racially diverse and each carrying his or her secret shame, these teenagers love the superpowers they’ve been awarded by Zordon, but they quickly discover they can’t “morph” into their protective battle bodysuits until they truly become a team.

Naturally, this forces these blasé, tic-heavy characters to drop their attitudes and start being vulnerable around one another. But because the performances aren’t compelling — it’s impossible to buy that they’re the chosen ones who alone can defend Earth — the lowering of the characters’ guards isn’t as emotional as the filmmakers imagine.

In the meantime, Power Rangers rifles through action-movie clichés. Not only do these teens have to go through training montages, there’s the dopey comic relief in the form of Alpha 5, the overly complicated back story that explains the origins of the Power Rangers, and the pat lessons about the importance of putting the needs of the team above those of the individual. With its city-block-levelling action sequences that recall Transformers, to the characters’ adolescent enthusiasm that mirrors similar moments in the Teenage Mutant Ninja Turtles films, Power Rangers feels late to the party, its every move telegraphed by earlier films.

What is unique, unfortunately, is the winking shamelessness. An extended product placement for Krispy Kreme, especially during a pivotal plot point, is so unsubtle that it almost plays like a parody of the technique. And although the film mostly goes for a sleek, flashy style, Power Rangers throws in a quick snippet of the “Go Go Power Rangers” TV theme song as a cheeky acknowledgment of the property’s cheesy roots.

But the film’s most blatant camp comes from Banks’ colourfully arch performance as the mighty sorceress Rita Repulsa, a former Power Ranger who wants the crystal for herself. Sarcastic and haughty, Rita walks through the film as if she knows that Power Rangers is third-rate Hollywood product, deciding that she might as well have a little fun. Good triumphs over evil on screen, but for the audience, her villain is the clear victor against her overmatched, inexperienced co-stars.