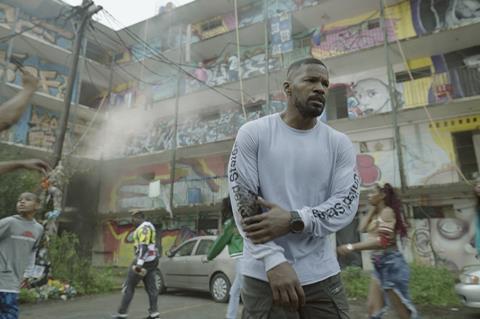 In Project Power, the characters are on the hunt for the brief, potent surge of energy that comes from taking a mysterious new underground pill — a fitting metaphor for a thriller which is invigorating only in short blasts. Directors Henry Joost and Ariel Schulman have crafted a knowingly cheesy action movie that flaunts its adrenalised excessiveness, while Jamie Foxx and Joseph Gordon-Levitt, playing two very different men in search of the pills, never manage to transcend the project’s fundamentally generic, cartoonish design.

Available on Netflix from August 14, the film may be a balm for genre fans craving stories about superpowers after a summer without any Marvel or DC offerings. Foxx and Gordon-Levitt bring star wattage, and the streaming service has had success luring audiences with amped-up B-movies such as Chris Hemsworth’s Extraction. But like many of Netflix’s action films, Project Power is notable mostly for how unremarkable it is.

Foxx plays Art, a former soldier living in New Orleans who is trying to track down Power — an illegal pill that taps the full potential of its user’s DNA, giving him or her extraordinary powers that last only five minutes. (Another catch is that the powers are individualised. Some people get super-strong. Others can generate incredible amounts of heat, or camouflage themselves with their surroundings.)

But Art isn’t looking to score. He’s trying to find the unscrupulous government operatives, led by a steely Amy Landecker, who masterminded Power and kidnapped his daughter. Meanwhile, a local cop, Frank (Gordon-Levitt), works with a teenage dealer, Robin (Dominique Fishback), to bust the shady suppliers distributing Power across New Orleans, which has suffered a citywide crime spree as a result.

Written by Mattson Tomlin, Project Power sets complete strangers Art and Frank on an inevitable collision course — unbeknownst to one another, they’re after the same people. Meanwhile, Joost and Schulman aim for a similar frantic, hyper-stylish vibe as in their 2016 thriller Nerve. In limited doses, this new film can be a giddy diversion as the directors collaborate with cinematographer Michael Simmonds and editor Jeff McEvoy to bludgeon the viewer with outlandish, ultra-violent action sequences. There’s a fleetingly enjoyable big-dumb obviousness to the proceedings as our heroes battle bad guys who, once they take Power, become whirling dervishes of pure menace. (Unlike higher-budgeted blockbusters, Project Power relies on bloody, gruesome fight sequences and a nasty, jokey sense of humour in lieu of cutting-edge special effects.)

But although Project Power is technically an original screenplay, its incorporation of superpowers — and its exploration of the “real” power inside each of us — couldn’t be more familiar. Nothing in Project Power hasn’t been done better in an X-Men movie, and the characters are cardboard, sometimes to an almost insulting degree.

Playing a rogue cop who bends the rules in order to get the job done — he’s also a frequent Power user himself — Gordon-Levitt isn’t very convincing in a role that requires a grittier, more tormented presence. Foxx’s effortless swagger serves him well as Art, a desperate man who will stop at nothing to save his child, but the Oscar-winner actor mostly just coasts on edgy attitude.

As for Fishback, her teenagee character is an irritating stereotype which she tries to enliven. The daughter of a poor, ailing single mother, Robin sells Power because she has no other options, but the filmmakers’ patronising view of the character underscores Project Power’s glib attempts at social commentary regarding the struggles of black Americans. (And the fact that Robin’s personal “power” is her ability to rap doesn’t feel empowering — rather, it comes across as an objectionable racial cliché.)

Joost and Schulman also miscalculate when they try to use their New Orleans setting to critique the US government’s negligent response to 2005’s Hurricane Katrina. Project Power is never exactly high art, but at least its down-and-dirty thrills have a certain scuzzy integrity. By comparison, the movie’s tortured allegory regarding the spread of Power — positioned as yet another example of the government turning its back on the city’s most vulnerable — is shallow and off-putting.