After an awkward first date, Daniel Kaluuya and Jodie Turner-Smith are hunted as cop-killers 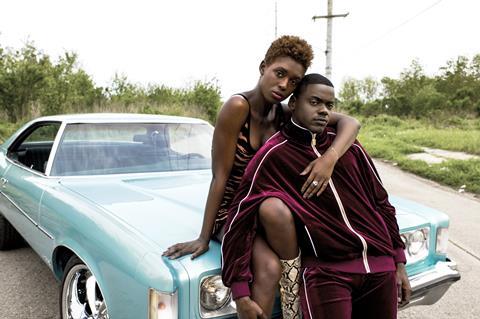 An awkward first date leads to death and a manhunt in Queen & Slim, an uneven, impassioned social drama that seeks nothing less than to deliver an emotional snapshot of contemporary black American life during a period of increasing racism and hatred. Clearly indebted to on-the-lam classics such as Bonnie And Clyde and Thelma & Louise, the feature directorial debut of Melina Matsoukas, like its unlikely outlaw characters, doesn’t always know where it’s going, veering wildly from heavy-handed theatrics to unexpected tenderness. Still, Queen & Slim’s cumulative impact mostly justifies the tonal inconsistencies, leaving the viewer with a troubling look at a society in which the marginalised always feel hunted.

Matsoukas makes a concerted effort to communicate what systemic racism feels like, and how those oppressed by it try to cope

This AFI Fest opening film hits US screens on November 27, with a UK release planned for January 2020. Daniel Kaluuya’s star power will be crucial to a film that will probably receive mixed reviews but may inspire heated commentary.

As Queen & Slim opens, we meet an unidentified man (Kaluuya) and woman (Jodie Turner-Smith) on a first date that doesn’t seem to be going well. (In the end credits, they’re referred to as Slim and Queen, although those names are never used during the film — an indication, perhaps, that the characters are meant to be stand-ins for a universal African-American experience.) While driving Queen home, Slim is pulled over by an abrasive white cop (Sturgill Simpson), who overreacts and clips Queen in the leg with a gunshot. During the subsequent skirmish, Slim kills the policeman, which prompts the two to hit the open road to avoid jail.

Queen and Slim’s panicked decision is based on their assumption that they’ll never receive a fair trial for shooting a white cop since they’re black, even though it was in self-defence. That may seem irrational, but it’s symptomatic of Queen & Slim’s pessimistic, desperate worldview, which takes as a given that, in modern America, black people must always be fearful of a suspicious white society that sees them only as thugs or troublemakers.

Matsoukas, a television and music video director, allows Queen & Slim to meander as her two protagonists drive cross-country seeking estranged family members and other safe harbours while trying to elude law enforcement. Tat Radcliffe’s widescreen cinematography and Lena Waithe’s digressive screenplay catch small details of the characters’ journey, turning each stop along the way into its own little vignette that adds atmospheric texture while connecting to the story’s overall themes of alienation and disenfranchisement.

Queen & Slim intentionally gives us little information about Queen and Slim, so that, in a sense, their strange odyssey becomes an opportunity to get to know each other after their brief, unsuccessful date. Kaluuya plays the religious, teetotall Slim as a cocky enigma, while Turner-Smith makes Queen, a defence attorney who is a bit of a loner, into a wary individual fearful of getting close to anyone. The road trip will help elucidate their personalities, and yet there remains something unknowable about both of them.

As with Thelma & Louise, Queen & Slim is, in part, an existential thriller meant to use the crime-drama genre as a vehicle to explore cultural ills. Where Thelma and Louise rebelled against the sexism around them, Queen and Slim discover that the bigotry that’s part of the background of their daily lives moves to the forefront after Slim kills the officer. Different black people they encounter during Queen & Slim have differing opinions regarding what they did — some view the couple as heroes, others as foolish — but Matsoukas makes a concerted effort to communicate what systemic racism feels like, and how those oppressed by it try to cope. The police aren’t often seen, but the ephemeral dread of prejudice haunts nearly every scene, creating an invisible, palpable tension throughout.

Unfortunately, the film’s episodic structure can lead to unsatisfying detours, and the characters’ behaviour sometimes feels needlessly arbitrary. At its weakest, Queen & Slim treats its potential love birds as strident symbols of racial inequality, hitting the audience over the head with obvious points and manipulative emotional beats. But that same unbridled fervour helps give the film its messy urgency. Driving around America looking for refuge, Queen and Slim realise what they’ve always secretly known: there’s no escape from bigotry. Queen & Slim’s blunt-force sermonising can wear thin, but its core truth nonetheless gnaws at the viewer.