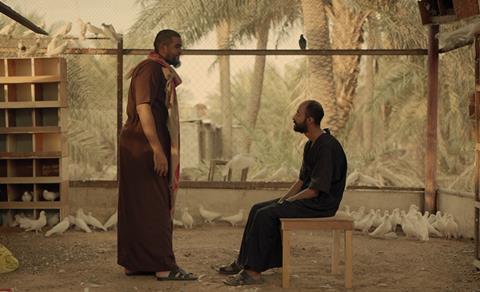 The real and the imagined intertwine in the debut feature from Mohamed Al Salman. Raven Song (Ughneyat Alghurab) offers a tragicomic and often surreal view of the life of Nasser (Asem Alawad), whose brain takes the strain after a medical diagnosis, although its scattergun nature won’t be for everyone.

A narrative so slippery it struggles to stay on its feet

Al Salman has previously made several shorts, including Curtain and 27 Shaban, which can currently be viewed as part of the Six Windows In The Desert collection on Netflix. Raven Song was one of four titles selected as winners of the Saudi Film Commission’s Daw Film Competition, which aims to support homegrown filmmakers. It has also been selected as Saudi Arabia’s official Oscar submission, which could help it get a foothold at festivals outside the region after its world premiere at the Red Sea Film Festival. Finding wider international distribution could be a trickier ask given the cultural specificity of much of the comedy.

It’s 2002, and disapproved of by his father (Abdulaziz Almubddal), who refers to him as a “dumb goat” and thinks nothing of smashing up his cassette collection with a large wooden mallet, there’s a drifting quality about Nasser even before his visit to Dr Ahmed (Wael Elnahal). In a mark of the absurdist humour that peppers the film, when an alarm goes off in the office and the doc gets out a mat, it isn’t to pray but to do a few sit-ups – in between which he points out that Nasser has a brain tumour that must be operated on.

Nasser is understandably less than keen on the idea, not least because he’s just got a new receptionist job at The Dove Hotel. In between regular irate calls from a woman whose TV receiver isn’t working — a running gag that doesn’t quite go the distance — a mystery woman (Kateryna Tkachenko) arrives in a flowing white abaya and asks to take a look at Room 227; a number that crops up repeatedly in Al Salman’s work. Once there, she leaves an equally mysterious letter, addressed to “the resident of this room”, inside a poetry book, which acts as a macguffin for much of what follows.

After she leaves the room, and Nasser smitten, he finds No.227 is in demand once again, this time from the elderly Abu Yasser (Abdullah Aljafal), who will go on to dip in and out of the story. Nasser, meanwhile, is trying to come up with a plan to win the heart of the mystery woman, enlisting the help of his mate Abu Sagr (Ibrahim Alkhairallah), who suggests he turns his hand to poetry to write her a song. A chance encounter with a journalist (Nawaf Almhanna), leads to his picture in the paper and an extension on the ‘Raven’ nickname Abu Sagr uses for him — and  so Nasser The Raven is born.

As if all of this wasn’t enough plotting to fill a single film, Al Salman also throws in a serial murderer dubbed the Raven Killer, while increasingly suggesting that much of what Nasser is experiencing may be hallucinatory rather than real. The result is a narrative so slippery it struggles to stay on its feet, although there are some stylish visual flourishes including brains falling from the sky and inventive employment of raven and dove motifs.

Nasser is a hapless innocent, emphasised by his gormless face repeatedly filling the frame. While this naivety, coupled with the fact that men and women had minimal contact with one another before marriage in early 2000s Saudi Arabia, explains Nasser’s obsession with the mystery woman, this infatuation doesn’t equate to character development.  He remains almost as much of a blank slate as his dream girl, so that it’s hard to feel invested in either of their fates.

The humour also never settles in tone, ranging from those blackly comic brains to running jokes concerning demagoguery that feel as though they come from the other end of the satire spectrum altogether.