'Scotty And The Secret History Of Hollywood': Toronto Review 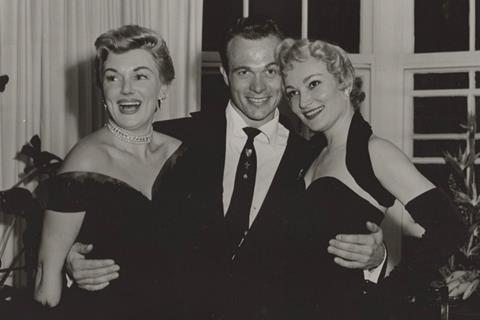 Scotty And The Secret History Of Hollywood

Scotty Bowers makes for lively, intriguing company in the gossip-y documentary Scotty And The Secret History Of Hollywood. Director Matt Tyrnauer follows the now-94-year-old Bowers as he tells tales of his days procuring sexual partners for movie stars — especially those who wanted to keep their homosexuality under wraps. But as its full title suggests, Scotty is more than just a portrait of the man, also serving as a history lesson on how the film industry once tried to project a repressive, clean-cut image to satisfy moral watchdogs.

The longer we hang around Bowers, the more Tyrnauer tries to understand what makes him tick

Always entertaining, but best when digging beneath Bowers’ jovial demeanour, Scotty should seduce fans of classic Hollywood; dishy anecdotes abound about legends like Cary Grant, Katharine Hepburn and Spencer Tracy. At the same time, the documentary’s detailing of the double lives that closeted stars had to live feels pertinent in our current moment when gay rights remain a hotly debated issue.

Inspired by Bowers’ 2012 tell-all Full Service, Scotty trains its camera on Bowers while he participates in book signings, attends parties and spends time with his wife Lois, whom he married in 1984. In between, Bowers bombards us with stories, explaining how he went from being a small-town Illinois kid to serving in the Marines during World War II to landing in Los Angeles, where he quickly started running a clandestine sex service, which was his entrée to the Hollywood elite.

Tyrnauer (Valentino: The Last Emperor) incorporates unpolished, on-the-fly interviews that allow this still-vibrant nonagenarian to speak freely — and frankly — about the celebrities he bedded. (Few men can lay claim to sleeping with Bette Davis and J. Edgar Hoover, although not at the same time — not that he shied away from threesomes, mind you.) Scotty is as unapologetic about its salacious material as Bowers is in revealing it, and the film succeeds as a breezy, albeit shallow tour through Hollywood’s closeted past.

But the longer we hang around Bowers, the more Tyrnauer tries to understand what makes him tick. Offended at the suggestion that he was a pimp, the bisexual Bowers proclaims that he just liked making people happy, but Scotty hints that this free-love attitude was, in part, shaped as a reaction to some traumatic moments from his past. The spectre of childhood molestation is raised, as well as the horrors of war — and then there’s the troubling evidence that, late in life, he’s become an obsessive hoarder. Yet, the documentary shies away from being the complex character study this bon vivant deserves, and Tyrnauer leaves viewers wondering about the topics the chatty Bowers doesn’t want to discuss.

To offer a broader societal context, the film taps photographers, Hollywood biographers and even actor Stephen Fry to flesh out Bowers’ cultural importance. Scotty perhaps overstates the man’s stature as a liberated sexual pioneer who bravely helped connect closeted stars with young, beautiful partners during America’s buttoned-down 1940s and ‘50s. Nonetheless, Tyrnauer smartly dissects how stifling the era’s sexual politics were — and his affectionate portrait of Bowers sneaks in some balance by critiquing him for writing a juicy tell-all that, in essence, outed people without their permission.

The movie ultimately brushes such criticisms aside, but not without first pondering how Bowers, like so many in Hollywood, crafted a compelling narrative out of his own life. That feeling is driven home by Lois’ candid confession that she doesn’t want to read her husband’s book — all of that happened a long time ago, she explains, and maybe she’d prefer to hold onto the idea of who Bowers is now.