‘Sidik And The Panther’: IDFA Review 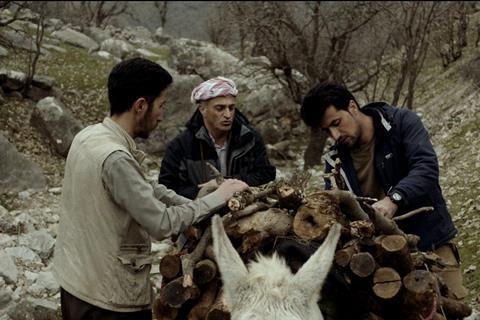 ‘Sidik And The Panther’

Despite the title, it’s people rather than leopards that are the crucial element of Reber Dosky’s slow-burn documentary. His camera may be focused on one man, Sidik Barzani, and his dedicated attempt to find a Persian leopard in the Kurdistan mountains of northern Iraq, but this is chiefly an elegy to the war-torn area and the people it has lost — both directly to conflict and to other countries as they have fled in search of a better life. The film is set for release in Dutch cinemas next spring after its world premiere in the Dutch Documentary Competition at IDFA, and could spark further interest for festivals looking for considerations of trouble spots that go beyond the battlezone.

Sidki’s hunt is no minor undertaking; he has been looking for the elusive leopard for 25 years. “I haven’t seen it yet,” he says, adding, “I’ll never give up”. He hopes that by finding one, and capturing it on camera, the area will be declared a national park and prevent any future conflict there. But leopards are more than just a symbol of hope for the future for Sidik; they’re also a link to the past and his own father, who he believes was the last to see one of the elusive animals before they, like so many of the local people, were driven to leave.

The documentary is also deeply personal for Dutch-Kurdish director Dosky, whose previous documentary Radio Kobanî also considered lives being rebuilt after conflict. He says at the start of his latest film that he has returned to the area after leaving 20 years ago “because I need to tell you the story of Sidik”.

As Sidik captures his reflections of the mountains and their history in his notebook, Dosky also opens up about the story of his own family, including the brutal death of his Peshmerga grandfather at the hands of Saddam Hussein’s regime. It’s a poignant exchange between the men in a documentary that is filled with such small but emotional connections, the tales and hopes of many others Sidik encounters on the mountainside become folded into the bigger picture.

Sidik seems so much at one with the landscape — captured in every weather condition imaginable by cinematographer Roy van Egmond — that it comes as a surprise when we see him in the modern kitchen and lounge of his home, chatting about his latest wildlife footage to his son. These scenes, however, serve to reinforce his hopes for the future of his country and the idea of the mountains’ spiritual pull for him, which remains constant.

Back up in his beloved mountains, the leopard hunter is equally happy offering sympathy or advice, whether it’s listening to a grandfather or trying to encourage a young man not to quit the country; although a couple of encounters with people with Kalashnikovs are a reminder that, despite the bucolic setting, violence is never far away.

The melancholic moments are well-supported by the score from Dennis Hazenoot that draws on the musical traditions of the region to further evoke the spirit of the past meeting the present. In the end, you suspect it is not the leopard but the enduringly hopeful spirit of Sidik and those like him that offers the most hope for the future.