A historic boarding school comes under attack from subterranean monsters 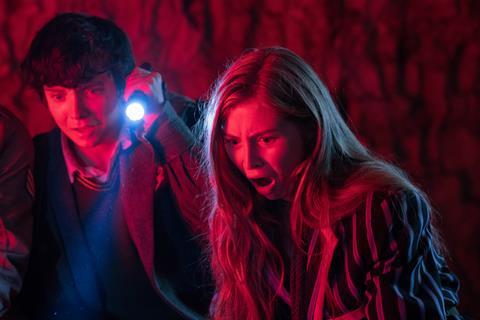 The basic premise is quite appealing: a group of over-privileged teenagers from an elite public school are terrorised by subterranean monsters that look like entrails with badly fitted dentures. But for all the gung ho fx and severed limbs, this sloppy horror comedy under delivers on both shocks and laughs. And an environmental message – the monsters are stirred by the reckless rape of the countryside by a fracking company – feels tokenistic rather than motivated by genuine concerns.

The film is executive produced by Simon Pegg and Nick Frost, under their new film and television production banner, Stolen Picture. While the Pegg and Frost names – both also appear in the film – will be a key marketing tool, the film lacks the distinctive, knowing humour of their previous comedy-genre collisions like Shaun of the Dead and Hot Fuzz. The film may struggle to find a niche in a market which is already well-supplied with both British public school satires and eco-horror pictures.

Finn Cole stars as Don Wallace, a relatively normal Northern teenager whose widowed mother believes she is honouring his late father’s wishes when she scrapes together the money to send him to historic boarding school Slaughterhouse. (Sound the nominative determinism klaxon right about now.) Don is clearly intended to be the relatable outsider through whose eyes we view the arcane rituals and school-sanctioned bullying of this venerable establishment, yet feels like an assortment of character traits which don’t cohere into a whole. Asa Butterfield fares little better as his camp new roommate Willoughby Blake, equipped at all times with a snuff tin and an air of wearied disappointment.

The pair strike an uneasy accord, unified by their outsider status and mutual antipathy towards sixth form psychopath Clegg (Tom Rhys Harries). Meanwhile Pegg, playing a lovesick housemaster, is unmoored in a subplot which sees him tearfully skyping his former girlfriend, now working in Africa (a cameo from Margot Robbie which speaks more about the persuasive power of Pegg and Frost than it does about the strength of the role). The editing, forever chopping together simultaneous montages and unrelated story lines, is inelegant; the score, all clanging alarm notes and ominous sawing strings, leaves little to the imagination.

Not that much imagination is required once Michael Sheen wafts onto the screen. He plays the school principal with the toothy casual treachery of a Tory frontbencher. His deal with the fracking company has caused gaping sinkholes in the earth, out of which unknown terrors will emerge. British public school kids and ominous underground networks don’t tend to have the healthiest relationship, as anyone who saw Nick Hamm’s The Hole will recollect.

Sheen is not the only actor who has been encouraged to take a ‘more is more’ approach to his performance. Nick Frost has equipped himself with metal teeth, the better to chew the scenery as an eco-warrior with a personal grudge. And Hermione Corfield, playing Don’s dream girl, is required to strip down to her basque in order despatch an attack slug with fangs.

Once the creatures are unleashed and the blood starts to flow, there’s a certain visceral kick to be had from the gleeful gross out mess of chewed up public school kids. But ultimately, rather than the beasts from below the earth, the characters seem to be mainly doing battle with a few too many underdeveloped story strands.