Debut set in Casablanca follows a young, unmarried mother as she gives birth 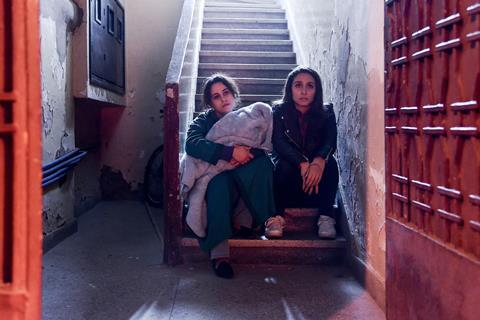 The pregnancy of a young, unmarried Moroccan girl is the basis for an intimate women’s drama and exposé of social hypocrisy in Meryem Benm’Barek’s debut feature, Sofia. Set in Casablanca, it’s a small, worthy, film that works reasonably well, although there’s something a little too linear about its structure. Nonetheless, it deserves to be seen widely in parts of the world where sex outside of wedlock is punishable by law (an opening caption informs us that it carries between one month and a year’s prison sentence in the north-east African state). French-speaking Europe should respond best, with other festival bookings also likely after its Cannes debut.

It’s while serving her parents and family during a meal at home, that Sofia (Maha Alemi) starts to experience stomach cramps. In the kitchen, her medical student cousin Lena (Sarah Perles) is shocked when she realizes that Sofia is pregnant. Passing the pains off to the family as “womens’ problems”, the two set off for hospital, where Sofia, practically in labour by now, is asked to present her ID card, and the name and details of her husband.

Except, of course, she doesn’t have one. Two narrative strands intertwine after Sofia’s baby girl is delivered, leavened by some delicate moments of comedy. One is propelled by the legal need to find a father and have him recognize the child, the other is driven by social pressures, the desire of Sofia’s shocked, shame-ridden family to cover up the birth, spare the young girl jail time, and “make things right”. Both converge in the house of Omar (Hamza Khafif), a tousle-haired slacker from a ‘bad’ working-class neighbourhood.

Some of the nuances of the three suburbs of Casablanca that are the film’s main settings may be lost on non-local audiences, but we get enough to know that Omar’s family are poor but proud, while Sofia’s are in the hard-working middle-class bracket, still a long way from her well-off, fully westernised cousin Lena, who lives with Sofia’s sophisticated aunt in a posh modern seaside villa with pool. The tension between these three worlds drives the story without giving it particular resonance: it’s a nice touch, for example, that Sofia’s first port of call with baby in tow is the house of the family maid, but we yearn for some of the depth and nuance that a film like A Separation gave to class, religious and ethnic tensions in a highly prescriptive, patriarchal Muslim city. There’s simply not enough teasing out of the social and family pressures that surround the main character.

A largely handheld camera dwells insistently on Sofia’s sullen face – in denial for most of the film, she locks down emotion or converts it into sulky aggression. There’s no faulting the conviction of Maha Alemi’s central performance here, but the block makes it difficult for us to warm to the character (in fact it’s the more privileged yet sweet-natured Lena who win the sympathy vote).

International sales: Be for Films, sales@beforfilms.com