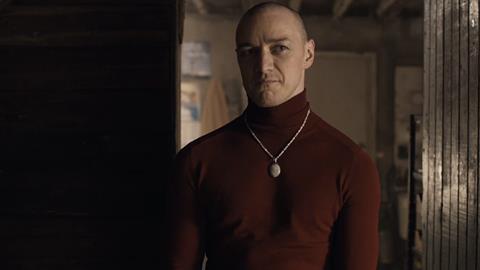 An abduction thriller in which the danger emanates from others but the true terror is within, Split is a highly effective, nerve-shredding horror movie that makes the most of its claustrophobic setting, familiar setup and psychological gimmicks. James McAvoy is an arresting menace as a man suffering from 23 — or is it 24? — distinct personalities, and the performance is both a feast of unsettling intensity and good-old-fashioned hammy theatrics.

Writer-director M. Night Shyamalan’s low-budget treat savours its midnight-movie creepiness, and yet its gripping finale turns out to be more emotional than one might expect. Split will open in the US on January 20 and while the Shyamalan name has lost its lustre in recent years — although his 2015 found-footage horror movie The Visit was a quiet success, grossing almost $100 million worldwide on a reported $5 million budget - McAvoy and rising star Anya Taylor-Joy will help boost Split’s visibility, as will strong reviews.

Taylor-Joy plays Casey, a teenaged loner who is kidnapped after a classmate’s birthday party, alongside the more popular Claire (Haley Lu Richardson) and Marcia (Jessica Sula). The man who nabs them (McAvoy) at first appears to be a tidy, fussy sociopath, instructing them not to leave the locked room where he’s holding them captive. But he returns several times, and in each instance he exhibits a different personality — whether it’s as an elegant woman or a mischievous little boy.

Thanks to separate scenes in which he meets with his counsellor, Dr. Fletcher (Betty Buckley), we learn that Kevin has 23 distinct personalities, all warring inside him. But what’s even more concerning is that a new personality, whom he refers to ominously as The Beast, is fighting to emerge.

Shyamalan establishes an air of dread from the opening abduction, and Split initially plays out like a typical beautiful-young-women-in-danger kidnapping thriller. (Rest assured, each of our three female protagonists will be in different states of undress or flashing ample cleavage at key moments.)

The film’s B-movie aesthetic is enhanced further by McAvoy’s confidently showy performance, which feels like an homage to Psycho’s Anthony Perkins and other actors who have played imbalanced bogeymen. Mental-health advocates may object to Split’s somewhat cavalier attitude toward Kevin’s condition, which mostly serves as a means to make the character seem creepy and give McAvoy an opportunity to bounce around between colourful personalities. But with that said, the actor brings genuine pathos to the portrayal, expressing a vulnerability within Kevin that, if anything, only makes this unpredictable antagonist more frightening and troubling.

Daringly, Shyamalan tries to draw a parallel between Kevin and Casey, who soon becomes the film’s central focus. Through judicious flashbacks, Split hints at incidents from the teenager’s early childhood that have left a permanent mark on her. In her own way, Casey is wrestling with demons as profound as Kevin’s, and Shyamalan grounds the proceedings in credible psychological underpinnings that make the eventual cat-and-mouse battle between the two characters emotionally compelling as well as increasingly suspenseful.

Although Casey isn’t a particularly well-drawn character — Kevin and his personalities dominate Split — Taylor-Joy (The Witch) shows a ferocious grit as a long-time survivor determined to stay alive. Richardson and Sula have little to do, but Buckley is excellent as a brilliant therapist who specialises in personality disorders, her conversations with Kevin consistently riveting. If Shyamalan executes the demands of the close-quarters thriller fairly effectively throughout, it’s these smart, unsettling scenes between Buckley and McAvoy where he gets to show off his ability to create tense moments from seemingly simple situations.

Split boasts a wonderfully funky atmosphere, thanks in large part to cinematographer Mike Gioulakis and production designer Mara LePere-Schloop. Kevin’s underground lair is just drab and rundown enough to feel both ordinary and disturbingly alien, leading to a powerful final showdown between Kevin and Casey that legitimately raises the stakes and believably ties into their backstories. The movie’s barebones construction may not be very inventive, but Shyamalan and his cast keep finding clever ways to sidestep familiarity to give their film its own personality.