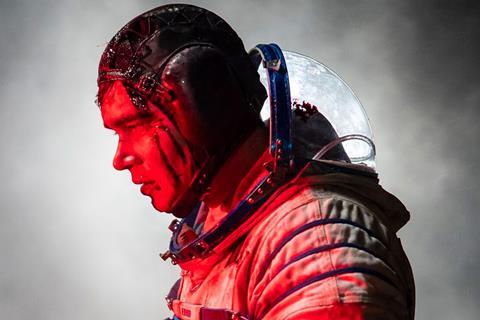 On the brink of losing her medical licence due to her unorthodox methods, psychiatric doctor Tatiana Klimova (Oksana Akinshina) is whisked away to a high security facility in the bleakest reaches of the steppes. It’s a place, she soon discovers, with markedly less squeamishness about extreme treatment techniques. Her subject is a dashing cosmonaut, a hero of Russia, who, following a mysterious incident in space, has returned home with a symbiotic alien stowaway living in his body. Her job is to safely separate the two. But other figures have more sinister plans in this horror-infused Cold War-era sci fi.

A repulsive slithering creation, which, it turns out, feeds on the fear that it generates

The debut feature from commercial and music video director Egor Abramenko, Sputnik is strikingly styled and builds on the themes of his short film, The Passenger (2017). Originally due to premiere at Tribeca, the film will now be released in the UK and US through digital platforms (by Vertigo and IFC Midnight respectively). While it might have found an audience in genre programs in further festivals, VOD also seems like a good fit for a film which opts out of delivering much in the way of real scares.

A loose grip on pacing and muddied internal logic battle with first-rate special effects. Oksana Akinshina (best known for her breakthrough performance in Lukas Moodysson’s Lilya 4-Ever) is certainly Sputnik’s main asset. Self-possessed and strikingly photogenic, she brings a steely credibility to the role of a maverick scientist who is more than happy to be cruel to be kind. Tatiana’s treatment of a teenage psychiatric patient involved holding his head under water until he was close to drowning. “I was right,” she glowers at the review panel which is in the process of removing her from her job.

Her first encounter with cosmonaut Konstantin Veshnyakov (Peter Fyodorov) is charged with sexual tension and intellectual one-upmanship. She diagnoses PTSD and prepares to leave the top secret military base. Then Semiradov, the officer in charge, chucks in a curve ball. Summoned from her quarters in the small hours of the morning, Tatiana watches, repulsed but fascinated, as a creature made of teeth, slime and spindly limbs hauls itself out of the sleeping cosmonaut’s mouth and snarls at her through the reinforced glass partition.

The creature design and special effects are impressive  – it’s a repulsive slithering creation, which, it turns out, feeds on the fear that it generates. Or to be more accurate, feeds on the brains containing the fear. Elsewhere, production design and cinematography work together to create an effectively unsettling atmosphere. The location is imposing and concrete, an echoing Soviet edifice which is lit in a diseased colour palette of bilious yellows and cadaverous greys. A thundering, clanking score, which sounds as though it was recorded in the corridors of a disused mental asylum, adds to the ambience.

But atmosphere alone is not enough. Abramenko fails to generate much in the way of empathy with the characters, resulting in tension being diffused by the fact that it’s hard to care very much for their outcomes. This wouldn’t necessarily be a problem if the film had delivered sufficient gore to keep genre fans happy. However, despite the fact that the cement floors are frequently slicked with blood and brain juices, the camera is disappointingly coy about getting close to the face chewing and skull crushing action. A muddled final act, a subplot involving an abandoned child in Rostok orphanage and some preposterous character motivations all contribute to the sense that this picture is best classified as a missed opportunity.