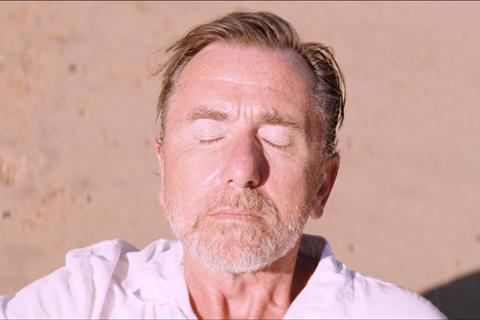 After the epic sweep of his biting social and political parable New Order, which picked up the Special Jury prize at Venice just a year ago, Mexican auteur Michel Franco returns to the festival with this small but intriguing Acapulco-set drama that pairs him with Tim Roth once again. Franco seems to see in the British actor a vessel for enigma, a study in impenetrability: that was certainly true of Chronic (2015), and it is once again the case here.

Sundown is a family meltdown drama that seess Franco veer close to Michael Haneke in his clinical observation of bourgeois fault lines. But the film shares another characteristic with the Austrian director’s work in that it’s at its best when being infuriatingly reticent, and at its weakest when forced to offer some sort of explanation. That won’t stop this quirky, brittle film touring a string of other festivals after its Venice Competition debut before surfacing theatrically in a handful of arthouse markets – though here it may need to get in line behind New Order, which is still awaiting release in several territories.

Sundown’s opening teases the audience into making assumptions about the London-based family group seen holidaying in a very upscale resort near Acapulco – the kind of place that gives you a whole villa with pool and staff. There are two adults, Roth’s Neil and Charlotte Gainsbourg’s Alice, with two teenagers, Alexa (Albertine Kotting McMillan) and Colin (Samuel Bottomley). It seems logical to assume this is a couple with children. a family unit.  News soon arrives, though, that Alice’s mother has died in London. Neil, who has seemed a little absent and distracted as the four pack and race to the airport, can’t find his passport – so Alice and the children depart, leaving him to get back in a taxi… and tell the driver to take him to any old hotel in Acapulco, he doesn’t care.

What comes next is both utterly banal and weirdly tense. Neil gets a room in a cheap hotel on Caletilla Beach, a downscale part of Acapapulco where most of the holidaymakers are Mexican and a gringo stands out like a burrito in a margherita. And here he does precisely nothing – other than drink beer on the beach, eat big plates of seafood, let the sun warm his face, and field Alice’s calls, which start off sympathetic but become desperate and then accusatory as it becomes clear Neil has no intention of replacing his passport and flying home for the funeral. He even starts what we assume is an extra-marital affair with Berenice (Iazua Larios), a pretty, footloose shop owner who may start off chasing a profit motive but soon seems to develop a genuine affection for this mild-mannered, gallant, undemanding foreigner.

The Roth-Gainsbourg scenes are fascinating: she is all taut emotion, whole he behaves as if his nerve endings have been cauterized and he’s entered some sort of easy-going, genial state of illumination, or vacancy. The third main character is Acapulco itself, framed as a run-down holiday spot with none of the glamour and allure of those distant days when Orson Welles and Rita Hayworth came here to shoot Lady Of Shanghai. Its edge of coercion and violence erupts during a scene on the beach when a bar owner is shot by two assassins on a jet ski, and will come back with a vengeance two-thirds of the way in, suddenly shifting the plot into gear.

As garish visual and auditory hallucinations connected (perhaps) with the family business that Neil seems to be fleeing come back to haunt him, the film floats an interesting idea: is it possible to lead a life based entirely on lack of volition, going with the flow, without hurting others? That idea is not quite followed up in Sundown, which, like Chronic, juggles several themes (one of them foreshadowed in the film’s title) without really tying any of them up. And it feels like, once again, the writer-director has been forced to bring an intriguing, open-ended dramatic wrestling match to a close with an ending that’s not really an ending. Yet there are moments when, like the gaudy lights of Acapulco, Sundown flickers into something rather special when seen from the right angle, in the right mood: a film about a goodbye to life which is also a film about a kind of afterlife.