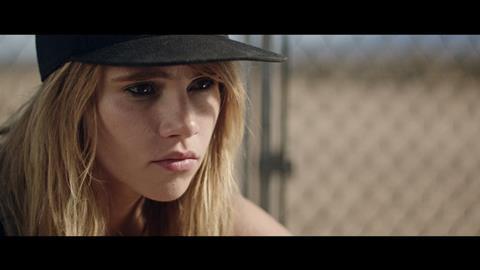 Cool production design, cool soundtrack, cool tattoos; shame about the script. Iranian-American director Ana Lily Amirpour’s follow-up to her edgy arthouse genre trip A Girl Walks Home At Night does nothing to disprove the old ‘difficult second album’ adage. Ten years after Richard Kelly’s Southland Tales, another director of promise dives head first into a dystopian miasma and gets lost there, spending time and dollars conjuring up a Mad-Max-ish outcast reserve of cannibals and grifters somewhere in the Texas badlands, a reserve that is populated by everything except a convincing, engaging story.

After the tense opening, coherent drama goes by the board

With its hip pop-culture attitude and horror-Western genre sheen, not to mention a smart cross-media (fashion, TV, film) casting mix, The Bad Batch is unlikely to completely crash and burn at the box office like Kelly’s expensive flop – but equally unlikely to do well, or to become a small cult item ten years on. There were some interesting ideas about cultural dumbing-down and the increasing authoritarianism of the war on terror hidden in the fog of Southland’s apocalyptic satire, here there is just one: that if America goes on demonising and persecuting asylum seekers and outcasts – well, this might happen.

We’re told roughly what ‘this’ is by an opening-credit montage of walkie-talkie voice-overs in which US customs officials are told to avoid eye contact with ‘bad batch’ inmates – who, we will discover, have their batch numbers tattooed behind their right ears. They’re not, as we initially suspect, zombie-virus sufferers but simply undesirables – like Arlen (British model-turned-actress Suki Waterhouse), who in the opening scene is dumped unceremoniously inside a fenced enclosure in what we immediately recognise to be Spaghetti Western territory. A sign at the entrance to this gated desert wilderness tells us that this is no longer the territory of Texas – and US laws do not apply here.

What follows, as Arlen sets off to walk across the badlands clad in little more than a pair of watermelon-print hotpants, will pan out between three locations – a cannibal camp, a shanty town that comes on like an Ibizan hippy market gone sour, and the desert no-man’s land that separates them.

It’s to the first that Arlen is dragged, gagged and bound, to make a meal for the inhabitants – a bunch of regular body-builders like Jason Momoa’s Miami Man (handily identified as such by a tattoo across his chest), who live in abandoned airplanes and, in an extreme version of the Atkins diet, subsist almost entirely on human flesh.

This they hack piece by piece from their chained captives, who are kept alive (and fresh) for as long as possible by cauterising the bits that have been lopped off. But Momoa’s character is at least a sensitive cannibal, who spends his time sketching subjects like his cute Goldilocks of a daughter.

For all its grisly shock tactics, this opening 20-minute sequence is a tense, suspenseful ride, up to and including Arlen’s escape from the cannibals, minus an arm and part of a leg, which ended up on the grill. It’s when she’s picked up by a mute shopping-trolley-pushing tramp called The Hermit (Jim Carrey at his most grunty and grizzly), and taken to the town of Comfort, that the story runs out of steam – with a full ninety minutes still to go.

A cue for corny-profound lines of dialogue (“You’re a long way from Comfort”), Arlen’s new home is a sub-Blade-Runner shanty town protected by high walls of rusting containers. It’s dominated by recycled or rebooted 1970s and 1980s technology: references to cassettes are everywhere, from the strands of magnetic tape that standard-issue crazy man The Screamer (Giovanni Ribisi) trails in his wake to a huge mobile disco in the shape of a boxy vintage ghettoblaster that alleviates the hard lives of these societal rejects with techno music and handouts of free psychedelic drugs.

The latter are administered by the acolytes of The Dream (a cue for yet more corny-profound puns), about whom we know little more, by the end of the movie, other than the fact that he is somehow in charge around here, he shares with Colonel Gaddafi a penchant for female bodyguards, and he’s Keanu Reeves with a 1970s porn-star moustache.

After the tense opening, coherent drama goes by the board – one example among many being the way that, months after her cannibal camp ordeal (and now equipped with a homemade prosthetic leg), Arlen sets out to wreak revenge on her tormentors as if the idea has only just occurred to her.

However, this is a woman who (as a comment she lets drop reveals), thinks Cuba is somewhere near Hawaii. Presumably her ‘bad batch’ number is the one given to those suffering from terminal stupidity. This would also explain why she thinks Miami Man – who she meets in the wilderness on one of her walkabouts – might just make a good life partner, despite his penchant for human T-bone steaks.

It’s difficult to gauge whether it’s a lack of acting range or a lack of confident direction that makes Waterhouse’s and Momoa’s sultry bonding so difficult to connect with. Perhaps it’s just the fact that when, after long meaningful silences, one of them does finally deliver a line of dialogue, it’s (to quote one memorable example) liable to be a corker like “all of the things that happen to us, happen to us”.

Whenever she feels that cool production design and cod philosophy may not be enough to sustain us, the director puts another song on the soundtrack. With tracks by Die Antwoord, Ace of Base and Darkside, as well as a counterpoint stunt straight out of the Tarantino rulebook (a grisly cannibalism scene set to Culture Club’s Karma Chameleon), The Bad Batch feels, at times, like an extended music video.