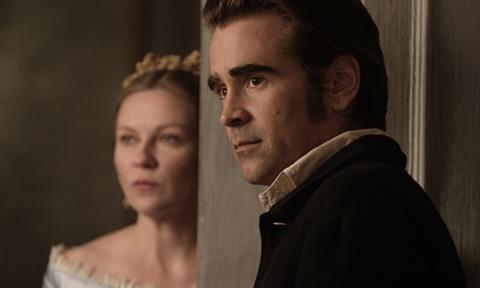 In The Beguiled, it’s not always clear who is the prisoner and who is the captor. Ambiguity bewitches Sofia Coppola’s modest but supremely immersive and thought-provoking Civil War drama, which examines gender roles, desire and power dynamics with a mesmeric specificity. Led by superb performances from Colin Farrell as a wounded Union soldier and Nicole Kidman as a headmistress who’s unsure of his intentions, the film consistently works as both a straightforward psychosexual thriller and something more troubling — almost unspoken — underneath.

The film has a palpable contemporary resonance, blurring the line between past and present.

After its Cannes debut, this Focus Features release will hit US theatres on June 23. Strong reviews and abundant star power will guarantee must-see status with adult audiences looking to avoid the summer blockbusters.

Based on Thomas Cullinan’s 1966 novel and the 1971 film adaptation starring Clint Eastwood, The Beguiled is set in 1864 in Virginia as the Civil War rages in the distance. Farrell plays Corporal John McBurney, a Union soldier who abandoned his regiment and is suffering from a badly infected leg. He’s taken in by the seven women who occupy the Farnsworth Seminary, which is run by the prim-and-proper Miss Martha (Kidman). Although leery of his presence, the women — including Edwina (Kirsten Dunst), a prickly schoolteacher, and Alicia (Elle Fanning), a student who fears the worst from the corporal — reluctantly start to warm to McBurney, their suspicion turning to attraction.

Coppola’s films often take place in rarefied, melancholic locales, and The Beguiled provides a potent addition to her stable of engrossing purgatories. The gorgeous, slightly worn-down estate that serves as this girls’ school feels like both an earthly paradise and a beautifully cloistered prison, the women so cut off from the outside world that McBurney’s arrival quickly sends shockwaves.

As McBurney gets to know Martha’s pupils, a very delicate dance begins between the characters. The women are scared of this enemy combatant and want him gone as soon as possible, but his rugged, hairy masculinity stirs longings that they respond to in different ways. (Martha plays up her sophisticated breeding, while Edwina lowers her guard, confessing her darkest secrets to McBurney.) At the same time, he knows that his safety is in their hands since he can barely walk: Is his charming attentiveness a con, or is he grateful to find compassion and sanctuary after witnessing war’s brutality?

Shot with luminous haziness by Philippe Le Sourd, The Beguiled exudes a dreamlike, timeless quality. But while its period detail is meticulous, Coppola views the story through a modern lens. All the characters keep their motives close to the vest, and yet the seminary becomes a de facto laboratory for a study of gender dynamics. The Beguiled sharply critiques the repressive traditions that women obeyed in the 19th century — Miss Martha has raised these girls to be demure conversationalists and knowledgeable homemakers — while presenting McBurney as a prototypical alpha male whose favour they battle each other to win. But because Coppola pinpoints what’s universal — even primal — about these courtship rituals, the film has a palpable contemporary resonance, blurring the line between past and present.

Even if viewers aren’t familiar with the source material, Coppola hints early on that this uneasy truce between the soldier and the women can’t last — and that the atmosphere of budding sexual desire will erupt. But if the path is somewhat predictable, that merely allows Coppola’s dispassionate style to infuse the scenes with layered meanings, always making room for multiple interpretations and shifting audience sympathy.

In this, she’s assisted greatly by her actors, who bring pokerfaced simplicity to their roles. Farrell exudes such soulful sincerity that every kindness McBurney utters to the women feels genuine. Suggesting both menace and vulnerability, he leaves the audience as uncertain of the soldier’s agenda as the women are. Even when the stakes are raised and violence ensues, Farrell’s complicated portrayal evades easy judgment.

Just as formidable is Kidman, who plays Martha as a woman who perhaps grasps that her world of genteel privilege is fading away, a realisation that infuses everything she does with bittersweet resignation. But Martha is no shrinking violet: she’ll respond to McBurney’s eventual provocation with steely resolve, suddenly making us question who truly has the upper-hand in this power struggle.

Screenplay: Sofia Coppola, based on the novel by Thomas Cullinan and the screenplay by Albert Maltz and Grimes Grice

Music: Phoenix, based on Monteverdi’s “Magnificat”