‘The Death of Cinema and My Father Too’: Cannes 2020 Label Review 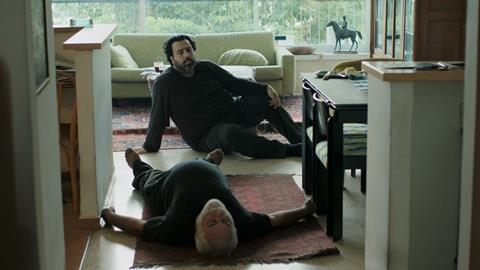 ‘The Death Of Cinema And My Father Too’

Behind its seemingly flip title, Israeli feature The Death of Cinema and My Father Too hides a sombre truth. While cine-philosophers may agonise over the supposed ‘crisis of the image’, there are few crises comparable to the death of a parent, which is the prime concern here. A first solo feature by the creator of Israeli TV series Milk & Honey, and co-director of 2018 documentary Zohar, the Return, The Death of Cinema… is a self-reflexive, multi-layered hybrid film about family, mortality and the ability, or inadequacy, of cinema to counteract the passing of time.

The viewer may well feel like a guest at someone else’s family function, invited but never entirely at ease.

The stakes, then, are formidably high, and Dani Rosenberg’s ambition should get him noticed among the new names included in the 2020 Cannes Official Selection. But the film’s labyrinthine construction can make for a challenging watch, and while one hesitates to call such an intensely personal venture self-indulgent, nevertheless that’s how The Death… sometimes comes across, which could limit future exposure to seriously cinephile platforms.

The film serves as a memorial to the director’s late father Natan Rosenberg, and includes much footage of Natan himself, not least acting in the rough video shorts made by his son when young (these appear to be genuine, although it’s not always easy to be certain what is and isn’t real). At the very start, Dani Rosenberg is heard off screen talking about his new project, while the old man, seen in close-up, cantankerously berates his son - apparently for real, although his comments may conceivably be scripted. Dani, he says, should think about earning a living to support the baby that’s due rather than obsessing over his movie plans, which are in any case obsolete – who in this day and age, kvetches Natan, thinks of making a film in the mould of Shoeshine or Bicycle Thieves?

We then meet Natan’s fictional alter ego Yoel, played by actor and prolific producer Marek Rozenbaum, who has agreed to play himself in a film by his son Assaf (Roni Kuban). Assaf’s film is apparently a comedy in which Yoel, convinced that Tel Aviv is about to be bombed by Iran, insists on driving his family to safety in Jerusalem. Halfway there, the drive is interrupted by the escape of the cat belonging to Yoel’s elderly mother– and then the film shoot has to stop, because Yoel has cancer. Also involved is Assaf’s wife Zohar (Noa Koler), from whom he is separated – although only in the fiction, because in reality the couple are together and expecting their first child.

Rosenberg initially impresses with his ability to interweave various threads and diverse formats, including celluloid, VHS and smartphone (the script editor is Nadav Lapid, whose own Berlin winner Synonyms had more than a touch of self-reflexive play). But the film’s intricacy eventually risks exhausting the viewer’s patience, as we constantly have to reassess what we’re seeing in each new sequence. We frequently flip from discussions between Dani and Natan to scenes showing Assaf and his family, while the director’s mother Ina Rosenberg is seen both as herself (in the authentic family footage threaded throughout) and as Assaf’s mother Nina. At one point, the music accompanying images of Yoel turns out to be played in a studio by klezmer musicians, who then play a different theme for a rerun of the same sequence. Elsewhere, Zohar takes control of Assaf’s film, spontaneously narrating a scenario that shows up his inadequacies.

The first comparison that occurs for such metafictional game-playing is inevitably Godard – the film isn’t nearly flamboyant enough to recall Fellini’s 8 ½ - although a closer comparison might be Chantal Akerman, in terms of Rosenberg’s simultaneously veiled and direct approach to autobiography and family history (Akerman’s swansong No Home Movie comes to mind in footage of Dani Rosenberg’s elderly grandmother Sabina, herself also played as a fictional character by Ruth Farhi).

Amid the multiple layers of imagery and fiction, the human presences give the film its emotional ballast. Marek Rozenbaum beautifully conveys the heft of a man whose body is slowing down while he furiously struggles against mortality – much, it seems, like the real Natan Rosenberg, whose curmudgeonly energy plays movingly against his fictional mirror image. Koler makes a strong, sharply humorous impression as Zohar, while the bear-like Kuban is sweetly affecting, his girth and overall softness accentuating Assaf’s almost baby-like quality. All these people give the film a poignant sense of lived emotion, and yet overall, the viewer may well feel like a guest at someone else’s family function, invited but never entirely at ease.