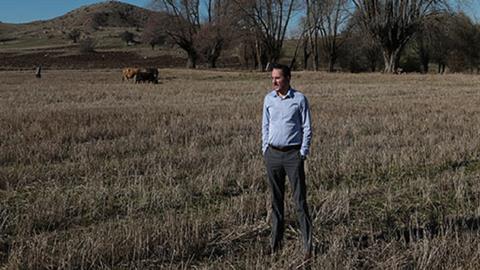 A former DoP, Turkish writer-director Cemil Ağacıklıoğlu has made a thoughtful, sensitively-shot slow-burn drama for his third feature. The Field focuses on a cash-strapped businessman and quietly nails the tension between city and country, material wealth and family values, in today’s increasingly repressed and recessionary Turkey.

Ağacıklıoğlu builds an absorbing, and surprising, drama played out in a confined space that is, by turns, both pressure cooker and comfort zone.

Stressed garment-trade entrepreneur Tarik’s car journey from Istanbul to his parents’ place in the country, and back in the other direction, this time with his provincial younger brother in tow, provides both the script motor and a neat structural metaphor for these tensions, as the hometown umbilical cord is stretched to breaking point. Though it takes a while to build, and perhaps doesn’t quite deliver the pay-off it deserves, Ağacıklıoğlu’s latest is a true cineaste-pleaser that should notch up further festival play and could prompt a few niche arthouse distributors to take a punt.

We know very little about Tarik (Serkan Ercan) at first other than that he’s a well-dressed but worried-looking middle-aged guy who, after turning off the lights in a drab office, begins a long drive out of the city. When he turns up unannounced at the rural house where his ageing parents live – a modest place by the side of some railtracks – we learn little more, other than the fact that he’s married, lives far away in Istanbul, and has a young daughter who her grandparents rarely get to see.

Eventually we also discover that he’s in the business of selling shirts – presumably like the anonymous light-blue one he’s wearing, which in the course of the film becomes a nicely underplayed ironic symbol, a flag of desperation. Because if there’s something else that is made clear at an early stage, from the phone calls Tarik makes or receives, it’s that this country boy made good hasn’t made all that good after all; in fact he’s in dire financial straits.

This information is conveyed, gradually, as a tense, unhappy Tarik visits a scrubby field owned by his family, wanders across a railway viaduct as he berates an assistant for letting a deal fall through, and is reluctantly persuaded to have tea with a cousin whose sand quarry business is on the up and up, thanks to an Ankara construction boom. “We’re carving up the mountain”, the cousin remarks – a boast echoed in the exterior settings of a film that plays out in a devastated rural landscape, an arid, sterile place of roads, viaducts, quarries and empty train lines leading who knows where (the only time a goods train actually passes, it drowns out the only real one-to-one conversation Tarik has with his father, as if to stress their lack of connection).

That barren field, his family’s only nest-egg, will come to play a major role in the plot of a film that, around an hour in, becomes a ‘car movie’ with shades both of Kiarostami’s A Taste of Cherry and Steven Knight’s Locke. Here too, as Tarik frets about his debt to a loan shark and simmers with resentment against his younger brother Emre (Ilgaz Kocatürk ) who has been forced upon him for the journey by his father, Ağacıklıoğlu uses a mix of dashcam, reverse dashcam and side-window persectives to build an absorbing, and surprising, drama played out in a confined space that is, by turns, both pressure cooker and comfort zone.