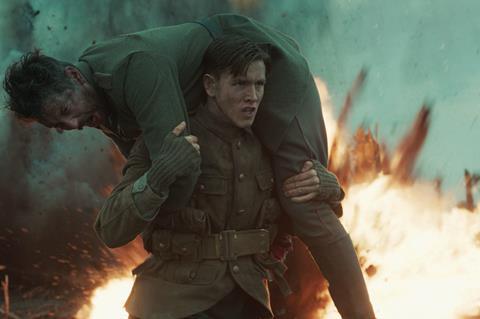 The King’s Man is a ’Kingsman’ prequel: the first Kingsman film released in 2015, the second in 2017, and this was originally set for release in November 2019. That’s a short enough timespan to suspect a the script might have been scrawled on the back of a fag packet and producer/director/co-writer Matthew Vaughn delivers little to contradict that. A slap-it-all-up-on-the-screen B-movie iteration of a Bond knock-off, The King’s Man is essentially an ode to the prowess of the great British Second Unit. All that effort, though, and technical know-how - not to mention risky stunt work - in the service of such a lacklustre spoof is a little depressing. In the way of the First World War which it chronicles, there simply aren’t enough good men or women to throw at The King’s Man who could make a difference.

Sure, the B-movie gags fall flat too many times, but that’s hardly the end of the world

Kingsman: The Secret Service and Kingsman: The Golden Circle took just over $400m apiece globally back in the day. Times are different, clearly - China is not in the mix for now - and Omicron is throwing yet another spanner in the works of a global rollout which starts on December 22. Bond may have whetted appetites for big-screen spectaculars, but Spider-Man: No Way Home  and The Matrix Resurrections feel fresher, and this lacks both marquee names or any of the original cast. The studio will be relieved to finally get it out, and one presumes that at this point, any ROI will be gravy before a quick switch to smaller screens.

The problems seep through to The King’s Man’s wobbly bones. Sorely missing Jane Goldman as a co-writer, the film tracks the origins of the independent secret society which operated in the first two features (and derives from the comic book ‘The Secret Service’ written by Dave Gibbons and Mark Millar). At 131 minutes, this certainly proves to be a lengthy process, starting out in the Boer War of 1902 before moving to the trenches of France. A charitable description would be ‘episodic’, although The King’s Man seems more distracted than that.

The film starts with a bang: a bust-up on the Veldt, and the sight of a de-aged, bobble-headed Ralph Fiennes playing Orlando, the Duke of Oxford, a Secret Service sort travelling around South Africa with his wife and young son. Back in his Blighty pile, the Duke must now bring up the child alone with the help of a bossy Nanny named Polly (Gemma Arterton) and his manservant Shola (played by Djimon Hounsou, but the less said about these two roles, the better - not due to the performances, but a global network of domestic staff who cheerfully double up as spies is uncomfortable. It’s surely bad enough they’re servants.) The ‘mystery’ of the Kingsman name is ‘revealed’ when the Duke visits his tailor on Savile Row. It’s called Kingsman. Glad we cleared that one up.

That dealt with, Vaughn’s film moves straight into a scenario where an evil Scotsman called The Shepherd is assembling a coterie of international villains in a spectacular mountain-top lair to provoke the First World War. These include Rasputin (Rhys Ifans, tearing strips out of the gilded Tsarist scenery), Mata Hari (Valerie Pachner) Gavrilo Princip (Joel Basman), who assassinated Archduke Franz Ferdinand in Sarajevo (recreated here), Lenin (August Diehl) and Daniel Bruhl as a rotten aide-de-camp to Kaiser Wilhelm.

Tom Hollander plays the three cousins Nicolas of Russia, Kaiser Wilhelm and King George, another fun idea that fails to soar. And Charles Dance is Kitchener, a fast friend of the Duke - who refuses to allow his son Conrad, now grown into Harris Dickinson, be go anywhere near the international politicking that was his stock in trade.

Sure, the B-movie gags fall flat too many times, but that’s hardly the end of the world. In a way, this follows a through line from the original Casino Royale  with David Niven - it’s a knockabout cash-in. You can also admire the fruits of the talent dispatched to frame and deliver this film. The cast may not be known for opening weekend grosses, but from Fiennes on down they’re all fine actors, and certainly the technical team is world-class. This top-down imbalance almost mirrors the upstairs-downstairs dynamic of the plot, though, and it’s an understatement to say that The King’s Man has a weird, unsettling, tone. It’s the kind of film where Nanny Polly and her team of international servants-turned spies will try to kill a hammy Rasputin with a Bakewell tart, but then think nothing of lurching into No Man’s Land and plundering Wilfred Owen’s ‘the old lie’ of dulce et decorum est for some unearned pathos. It’s not short of budget - Kitchener is taken out on a boat solely to be torpedoed - but what it does with the money is, ultimately, more adventus mortuus est.