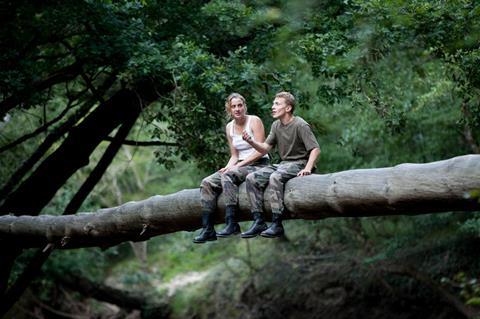 Two young French things discover that you can make love [its]and[its] war in Love At First Fight (Les Combattants) , a drolly enjoyable screwball romcom from first-time director Thomas Cailley. Essentially light but with a solid base of grit and mischief, Cailley’s film is about a slow-burgeoning romance between a good-natured regular Joe and a femme who baffles him at every turn. But where the bewitching women in such romcoms tend to be zany and fluffy (the ‘Manic Pixie Dream Girl’, as the type’s been dubbed), in this case she’s a hard-as-nails military fanatic who sees life as one big boot camp.

Starting off in a decidedly minor key, Cailley works up his gently acidic comedy with expertise, nicely working some new riffs on the theme of small town boredom, and eventually taking us somewhere unexpected as this counter-intuitive love match blossoms among the paintball bullets.

The film is a delicious vehicle for rising French star Adèle Haenel (so impressive in last year’s Suzanne), very likeably partnered by the candid, comedically astute Kevin Azaïs. A quiet but well-crafted intelligent audience-pleaser, Love At First Fight should export healthily to niche distributors, and festivals will love it. It could use a change of English title, though: why go for something so off-puttingly clunky when plain Fighters or even Combatants would do as well?

Set by the sea in the Aquitaine region of France, the film begins with Arnaud (Azaïs) and his older brother Manu (Antoine Laurent) getting ready to take over the timber company of their deceased dad. With not much action in town except visits from a Territorial Army recruiting roadshow, Arnaud finds himself signed up for a martial arts bout with a local girl, Madeleine (Haenel), who wipes the floor with him till he bites himself free.

Hired to build a shed for her parents, Arnaud gets to know the scowling, taciturn Madeleine better, and learns that she’s a rum ‘un: a tough cookie obsessed with learning hardcore survivalist skills to prepare for the coming apocalypse. Monomaniac, humourless and brutally unsentimental - and not averse to administering the odd headbutt - Madeleine worries the hell out of the otherwise confident Arnaud. But she’s also extremely alluring, and he falls for her so badly that he finds himself following her onto an army training fortnight.

Here the film skips into a more familiar farcical mode than the cooler, sardonic humour of the opening act. But the army stuff is neatly handled too, with Nicolas Wanczycki contributing a dryly funny turn as a long-suffering lieutenant. Then things ramp up to something in turns lyrical and - in a surprise climax - downright apocalyptic, as the couple desert their manoeuvres to rough it survivalist-style in a forest, with a bizarre and visually extravagant outcome.

Starting off in a decidedly minor key, Cailley works up his gently acidic comedy with expertise, nicely working some new riffs on the theme of small town boredom, and eventually taking us somewhere unexpected as this counter-intuitive love match blossoms among the paintball bullets. The leads are nicely cast, Azaïs making a sweetly flustered foil for Haenel’s variation on the Ninotchka routine - scowling, serious, forbidding and yet surprisingly tender when Madeleine eventually loosens up to the pleasures of life and love, in and out of camouflage fatigues.