‘The Lie’: TV Review (‘Welcome To The Blumhouse’) 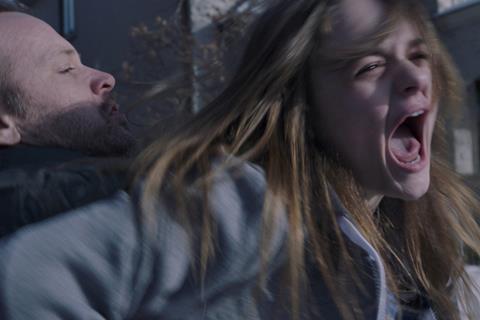 What lengths would parents go to protect their children? The answers aren’t very satisfying in The Lie, a remake of the 2015 German film We Monsters, which suffers from moral handwringing alongside some predictable plotting. Exploring a divorced couple’s anguished attempts to keep their teenage daughter out of trouble after she accidentally kills her friend, director Veena Sud stakes out potentially intriguing thematic terrain. But audiences familiar with this kind of story — and the inevitable complications that ensue once characters try to hide a brutal crime — will be ahead of the overheated storytelling.

The ideas here aren’t so original

Amazon Prime Video will stream The Lie as part of its four-part  ’Welcome to the Blumhouse’ series of horror/thriller films in October, moving towards Hallowe’en and relying on the Blumhouse brand to attract attention to a standalone production with A cast that includes Peter Sarsgaard, Mireille Enos and Joey King.

King plays Kayla, a 15 year-old girl struggling with the separation of her lawyer mother Rebecca (Enos) and musician father Jay (Sarsgaard). On the way to a ballet retreat with her dad in the middle of a snowy winter, Kayla sees her best friend Brittany (Devery Jacobs) waiting at a bus stop to attend the same event. Jay offers her a ride, but soon they have to pull over in the middle of the woods so Brittany can relieve herself. As Jay stays by the car, he hears a terrifying scream, running to discover that Kayla has accidentally pushed Brittany off a bridge into the freezing river.

Although Rebecca and Jay have their own lives now, they must work together to concoct a plausible lie about what happened — otherwise, their beloved daughter will go to jail. Their plan: hide any evidence that Kayla and Jay had ever seen Brittany that fateful day. From that setup, audiences can imagine exactly where The Lie will go as it chronicles just how hard it is to craft a cover-up when smartphones and unexpected eyewitnesses make deception harder.

Sud, who developed the American drama series The Killing (which starred Enos), gives the proceedings a gloomy, sterile air, hinting at the moral rot of the characters as they scheme to conceal Kayla’s crime. Whether in heist films or Crime And Punishment-style existential thrillers, what’s appealing is seeing how the wrongdoers outwit (or not) the forces closing in on them. Unfortunately, The Lie’s characters aren’t particularly compelling, and so their efforts to stay ahead of the police — and Brittany’s anxious South Asian father Sam (Cas Anvar), who is convinced this family is responsible for his daughter’s disappearance — fail to elicit much suspense.

The Lie takes a stab at thought-provoking issues — including the pernicious racism of law enforcement and how a dark shared secret can reunite a dysfunctional family — but these underlying themes tend to be swept aside by the dry thriller plotting. Enos and Sarsgaard are both dialled up a little too high, a fact that’s not helped by Sud (who also wrote the screenplay) sometimes putting the characters in preposterous situations. Ideally, The Lie should illustrate how guilt and panic drive seemingly accomplished people towards foolish behaviour, but the script contrivances just make these parents (and their daughter) seem not very bright.

Best known for the crime series The Act and the Kissing Booth films, King has a tricky line to walk, playing a tormented young woman who maybe isn’t being completely honest with her folks about what happened on that bridge. We’re meant to wonder if she’s troubled or just manipulative — or perhaps both — but because the film doesn’t provide enough nuance, Kayla feels like a walking red herring, endlessly teasing the audience with the possibility of would-be shocking revelations to come.

Of the supporting cast, Patti Kim shines as an unassuming detective whom Rebecca thinks she can get on her side because they’re friends, only to learn that her pal isn’t so easily duped. Since The Lie doesn’t offer much in the way of surprises — the more the family try to obfuscate, the tighter the noose gets around their neck — it soon becomes apparent that there must be some grand twist awaiting us. Sure enough, the picture’s final moments upend what we thought we knew, although the reveal isn’t entirely unpredictable. The Lie suggests that the truth can be hard to find, but one wishes the film was honest enough with itself to recognise that the ideas here aren’t so original.

Screenplay: Veena Sud, based on the film Wir Monster, written by Marcus Seibert and Sebastian Ko