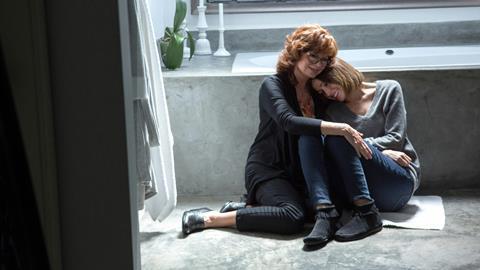 Inspired by her relationship with her own mother, Lorene Scafaria (Seeking A Friend For The End of the World) has made The Meddler into a sweetly comedic ode to mothers everywhere. While it’s better to let a radiant Susan Sarandon take you for a ride than ask too many questions about the fare, The Meddler is a mother-daughter date movie which could hit a rich seam in niche play and VOD when Sony sends it out in 2016. Valentine’s day counter-programming wouldn’t be a bad idea for a gentle love story like this.

It feels like years since Sarandon has had this good a part, and it’s a joy to watch her

It feels like years since Sarandon has had this good a part, and it’s a joy to watch her go about building Marnie Minervini into one of cinema’s most endearingly embarrassing mothers with a wide Brooklyn accent and an almost preposterous inability to recognise boundaries.  More lustrously attractive than your average mother, Marnie has moved to Los Angeles to be close to her adult daughter Lori (Rose Byrne), but close doesn’t go quite far enough in describing Marnie’s ambitions for the relationship.

Forcing herself into cheerful positivity two years after the death of her beloved husband of 40 years, Marnie knows no limits, but Sarandon doesn’t turn her into a shrill, over-bearing figure. She’s very sweet and endearing; guileless, even hapless: Marnie means to do well. Her purchase of an i-Phone sets off a chain of voice mails to Lori, who is dealing with grief in a different way to her mother, but is also depressed following the break-up of a significant relationship. (Lori works in the entertainment business, where she appears to be writing a sitcom based on her own family life; in fact, The Meddler has a sitcom-ish pacing for most of its run.)

Marnie is the type of mother who wafts into the house unannounced, checks her daughter’s browser history, and turns up uninvited at a baby shower for one of her daughter’s friends to gift the expectant mother with an over-generous i-Pad. She’s particularly partial to a Beyonce power ballad. Equipped with an inheritance from her husband, Marnie is also unable to press the stop button when it comes to her impulsive acts of generosity. A frequent visitor to Apple’s genius bar, she strikes up a friendship with employee Frank (Jerrod Carmichael), encouraging him to go to college, eventually driving him there at night and studying with him. She even under-writes a lesbian wedding for one of Lori’s friends, becoming a surrogate mother in the process (this, apparently, happened; no wonder Scafaria couldn’t resist writing this film).

Marnie also starts visiting Lori’s therapist (Amy Landecker) in a brazen attempt to find out more about her daughter.

Apart from being a series of comic vignettes, The Meddler is also framed partially as a romance, and a very endearing one at that. It takes an actor like JK Simmons to pull off the role of a retired cop who drives a Harley, raises chickens, and sings them Dolly Parton songs, but he’s got just the right heft to be persuasive. It’s a lovely little sidebar. Rose Byrne does well with the role of a besieged daughter who also takes her mother too much for granted.

The Meddler, with its gentle, almost whimsical attitude to story-telling, doesn’t entirely justify a 100-minute run, and some things are more credible as you watch them then when you exit the cinema into the cold light of day. But it’s attractively shot in a radiant Los Angeles, around The Grove shopping centre (“like being in Disneyland every day”) and up to Topanga Canyon by DoP Brett Pawak in a light and airy package that’s hard to resist, much like Marnie herself.