'The Other Side Of The Door': Review 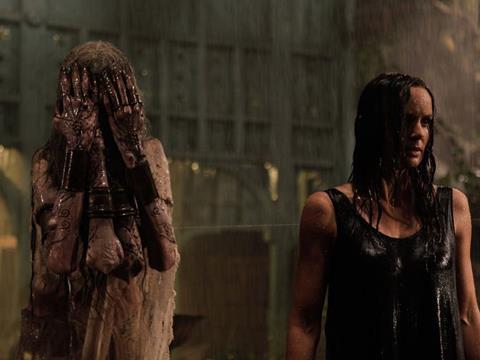 A mother’s guilt over the death of her young son becomes the impetus for the India-set horror film The Other Side Of The Door, which pulls off the nifty trick of being simultaneously highly predictable and infuriatingly manipulative. Director and cowriter Johannes Roberts (F, Storage 24) is after something primal — the frighteningly powerful bond between a mother and her child, and the lengths the living would go to reconnect with the dead — but he’s wrapped his themes in an inert movie in which any attempt at the macabre or the unsettling instead becomes actively unpleasant. This Door leads nowhere.

Mothers will do anything for their children, but this film’s simplistic brand of horror never makes that devotion compelling or frightening

Set to open in the US, UK and France in March, The Other Side Of The Door doesn’t have much star power - fans of The Walking Dead may come out to support Sarah Wayne Callies, even though her character was killed off on that show four years ago. Door’s generic horror tropes might make it appealing to easy-to-please genre aficionados, but grim reviews and tepid word-of-mouth may conspire to limit this movie’s theatrical prospects.

As the film opens, Maria (Callies) and her husband Michael (Jeremy Sisto) are Americans contentedly living in Mumbai with their young daughter Lucy (Sofia Rosinsky), although they still carry the emotional scar of losing Lucy’s older brother Oliver (Logan Creran) in a freak car accident that led to his drowning. But after their housekeeper Piki (Suchitra Pillai) tells Maria about a remote, ancient temple where she could communicate briefly with Oliver, Maria accidentally unleashes his spirit back into the world of the living, with terrible consequences.

Not unlike many horror movies, The Other Side Of The Door is set in motion by a character’s foolish tampering with powers beyond her control. Ideally, such a scenario has an emotional underpinning because we see the reasons why that character did something so reckless, but Maria’s actions are especially idiotic because Piki warns her explicitly not to do exactly what she ends up doing: opening the temple door that separates our world from the spirit realm. (Also, the fact that Piki just so happens to know about this temple’s dangerous séance-like power and then blithely tells Maria about it is unconvincing.)

Once Maria opens that door, Roberts duly rifles through every horror-movie convention, up to and including such tired chestnuts as having the family dog be the convenient warning system for whenever Oliver is invisibly roaming around the house. (By the fourth or fifth time Maria wonders why the pooch is barking madly into the darkness, you’d think she’d get the hint.) In addition, The Other Side Of The Door boasts a litany of uninspired jump scares — whenever a character looks down, you can bet he or she will see something terrifying when she looks up — and endless foreboding non sequiturs that keep hinting that something mildly wicked this way comes. (As a general rule, dried-up leaves silently falling to the ground aren’t especially horrifying.)

To give credit where it’s due, Callies tries her best to sell Maria’s clueless behaviour as a symptom of her stubborn belief that everything will ultimately be all right just so long as she gets her boy back. (In a melodramatic flashback, The Other Side Of The Door reveals how Maria was unable to rescue Oliver when their car went underwater. The scene isn’t moving as much as it is gracelessly traumatising, Roberts wanting to pound home Maria’s sense of guilt without a whiff of elegance or restraint.)

Refusing to see that Oliver’s return to the material world has made him an evil spirit, Maria tries in vain to recreate the life they used to have together, and Callies’ eerie, matter-of-fact calm can be spooky. But the actress’s commitment to a nonsensical character can’t save a script (co-written by Ernest Riera) that tries to generate dread from potential danger being visited upon Lucy because neither she nor her mother are bright enough to avoid walking into Oliver’s traps.

If the best horror movies bewitch us with their menacing spell, a film such as The Other Side Of The Door leaves viewers trapped in a hostile environment, its utilising of a child’s death as its volatile emotional anchor so unearned that the movie’s threadbare execution becomes offensive and risible. The child actors are merely adorable tots, empty vessels for Roberts to shock us with, while Sisto is relegated to the sidelines, his character meant to think that his wife has become unhinged when, in fact, she’s trying to come to terms with not one but two terrible decisions she’s made regarding her son. Mothers will do anything for their children, but this film’s simplistic brand of horror never makes that devotion compelling or frightening.