​'The Phantom Of The Open': London Review 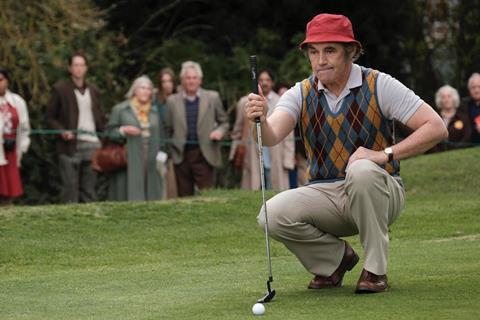 The latest addition to the British sporting-mediocrity subgenre, The Phantom Of The Open is an amiable little picture which might be dramatically as flat as Mark Rylance’s vowels but still packs a considerable helping of crowd-pleasing charm into its cap and golfing slacks. Rylance plays Maurice Flitcroft, a real-life shipyard crane operator from Barrow-in-Furness who decided to take up golf, blundered his way into the 1976 British Open and caused something of a sensation when he came away with, by no small margin, the worst result in the history of the tournament.

Adapted by Simon Farnaby from the book he co-wrote with Scott Murray, this is the third feature from director Craig Roberts. It’s a more comfortable and accessible picture compared to his previous film, Eternal Beauty, which took the audience into the rattled mind of a schizophrenic Sally Hawkins.

The appetite for unassuming tales of heroic failures evidently extends beyond Britain: the film has sold to multiple territories, including to eOne in the UK and Sony Pictures Classics in North America. The pairing of an affable Rylance with the always-likeable Hawkins, plus a heartwarming message which asserts that one ultimately doesn’t need to triumph at sport to win at life, should recommend the picture to the more mature, golf-playing end of the mainstream audience spectrum. Whether that audience can be lured back into theatres is a separate question — it might be that The Phantom Of The Open will connect most successfully via a streaming release.

There are obvious thematic parallels with the 2015 picture Eddie The Eagle, the story of the similarly hapless underdog Eddie “The Eagle” Edwards, the British ski-jumper who competed at the 1988 Winter Olympics, equipped with a can-do attitude but little in the way of actual skill. And as with Eddie The Eagle, failure at sporting endeavour is counterbalanced in the film by an acknowledgment of personal strengths elsewhere. The laconic Maurice is a man of decency, who gave up on his early dreams in order to be a rock for his wife Jean (Hawkins) and sons, but who took the words of Oscar Wilde to heart, never taking his eyes off the stars — even when the nationalisation of the shipyard leaves him threatened with unemployment and close to the gutter.

The awakening of Maurice’s sudden late-life enthusiasm for golf is depicted as a Damascene moment: one of the three channels on his new television is showing the US Open, and Maurice stares, awestruck and open-mouthed, before being propelled into an animated interstellar fantasy and blasted into orbit around a giant golf ball. It’s a slightly quirky device, but it lifts the affectionate but low-key storytelling of the rest of the film. Maurice is, at first glance, a solid, two-feet-on-the-ground sort of a chap, but inside him there’s a spirit that soars, refusing to be limited by the shipyard gates. Which is fine, but for all the underdog eccentricity of the story, there’s not much in the way of tension.

Following Maurice’s disastrous debut at the Open, he gatecrashes the event on several more occasions, using a fake identity and a false moustache. Drama is engineered by an overly emotive score, a golf-cart police chase and conflict between Maurice and his stepson. But the film works best when it focuses on the relationship between husband and long-suffering wife. Maurice and Jean might fit together as cosily as a pair of slippers, but the love between them is fierce and loyal. And Rylance and Hawkins tug every available heartstring to show it.