'The Prosecutor, The Defender, The Father And His Son': Review 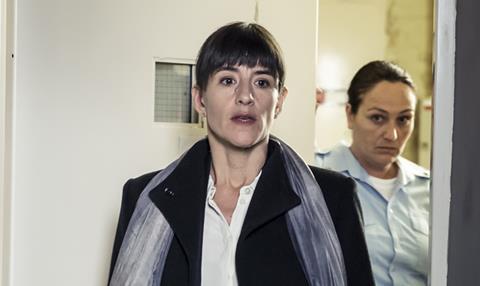 Two top lawyers go head to head in the high profile Hague war crimes trial. But, as the case unravels, it becomes clear that the pursuit of truth and the pursuit of justice are not always the same thing. This sober, serious-minded legal drama is based on a real case - the trial against Miroslav Deronjić, who was eventually sentenced to ten years in prison for ordering the massacre of 64 civilians in the Bosnian village of Glogova. Its high quality production values and thorny human rights theme should ensure an extended festival life. However the downbeat tone and lengthy, somewhat airless court scenes might hamper the film’s chances of achieving much in the way of theatrical success outside of the festival bubble.

Director Triffonova poses some troubling questions about the ethics of the legal profession in a film which takes itself very seriously.

The prosecutor is Catherine Lagrange (Romane Bohringer): austere, principled and devoutly Catholic, she has dedicated her life to the law. She believes fervently in the guilt of the accused, Milorad Krstić (Krassimir Dokov), although he seems to be able to weasel his way out of the charges.

Facing her, and probably no less convinced of his client’s guilt, is Mikhail Finn (Samuel Fröler). Finn is in a difficult ideological position which he justifies by declaring himself in service to the letter of the law. “If the law didn’t exist as a regulator, the world would be a horrible place,” he explains to the translator who can barely conceal his revulsion for Krstić and disdain for Finn.

The crux of the case comes with a last minute witness called to the stand by Lagrange. Witness K109 (Ovanes Torosian) is a young man who is prepared to testify that he was one of Krstić’s troops and witnessed him give the order to massacre civilians and rape their women. It’s a damning piece of evidence. But Krstić swears not to know the witness. Finn choses to believe his client and looks closer into the K109.

He secures the services of an investigator and discovers that, contrary to the K109’s claims, he is not an orphan. And with this part of the story disproven, the rest is called into question. He tracks down the young man’s grieving parents to a farmstead where they subsist, having all but given up hope of ever seeing their son again.

Finn grows to respect K109’s father (Izudin Bajrović), a quiet, dignified man with a knack for asking the kind of profound questions which Finn, even with all his legal expertise, can’t hope to answer. This mutual respect makes the consequences of reuniting father and son – consequences that Finn doesn’t make clear to either party – all the harder to bear.

Director Triffonova poses some troubling questions about the ethics of the legal profession in a film which takes itself very seriously. A drab colour palette, reserved shooting style and slightly oppressive sense of good taste reflects the lack of frivolity throughout the film. Unfortunately, for all the important issues raised and the high quality performances on display, there is only so much tension that one can wring from the rather sterile environment of a Hague tribunal.